The Difference Between VM Snapshots vs Backups

Backups and snapshots are two popular methods that enterprises use to mitigate and avoid data loss. In fact, more than 91% of organizations rely on backups to protect their data and mitigate the consequences of cyber threats and disasters.

Snapshots and backups may seem to serve the same purpose at first glance since they both allow you to recover data. However, snapshots are not an alternative to backups. They have varying use cases and cannot be used interchangeably.

This post explains both methods and lists their pros and cons. Read on to discover the differences between snapshots and backups.

What Is a VM Snapshot?

What Is a Backup?

What Is a VM Snapshot?

A snapshot is an exact record of a machine or system at a specific point in time. It preserves the state and the data of the VM including its power state (on, off or suspended) and all its files such as disks, memory and network interface cards. Snapshots are generally used to restore a VM after a system failure, bad update or error.

When you take a snapshot, the state of the base virtual disk is recorded and maintained at that moment. All changes are captured and written to newly-created delta disk files that are stored in the same folder as the base disk. The system creates child disks for each source disk of every snapshot.

The first snapshot is an exact image of your machine and the subsequent snapshots collect the changed data blocks only. This allows for quicker versioning and enhances protection against data loss incidents.

Note though that the child disks are directly dependent on the corresponding parent disk. If the latter is deleted or corrupted, then you can no longer recreate the VM. The recovery process reads all the files in a sequential order starting with the parent disk file followed by the related delta files.

In the VMware vSphere client, you can right-click the VM name, select Snapshots and click Take Snapshot to create a snapshot.

In Microsoft Hyper-V, VM snapshots are known as checkpoints. They operate in a similar way by saving or copying the state of a VM at a specific point in time.

To create a Hyper-V checkpoint, right-click a VM and choose Checkpoint. 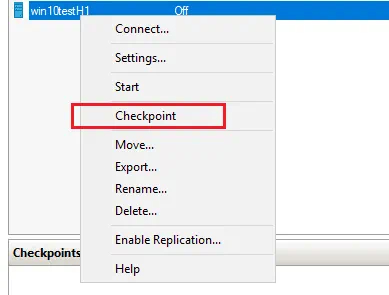 In Windows Server, a snapshots folder is created containing the binary file format:

Also, a differencing disk with the .avhdx format is created. This records the delta changes that are made post checkpoint creation.

In a virtual environment, snapshots act as a failsafe that can be used to roll back to a certain point in time. Snapshots are usually done before performing actions that might potentially damage the system or corrupt files such as installing updates, uninstalling components or editing software.

In addition, snapshots are useful in development environments since you can conduct “rinse and repeat” testing to validate code changes and recover recently changed data if necessary.

Pros and cons of snapshots

What Is a Backup?

Backups are copies of entire systems (including OS, configuration files and app data) or of individual files. When you perform any type of backup, you create copies of data that are completely independent from the source machine. This means that you can store backups for as long as you need in a location other than the original: offsite, in a public cloud, on tape or hardware storage devices like NAS or SAN.

Modern backup solutions offer high flexibility when it comes to recovery, retention and storage optimization. You can restore entire machines or individual files and folders, instantly boot machines from backups or perform cross-platform recovery. Backup solutions also enable you to rotate recovery points and use compression and deduplication along with other features for better performance and storage consumption.

Backups are the core of any data protection strategy since they are great for storing a copy of your data for a long period of time. By sending backups to multiple storage locations, you eliminate a single point of failure and guarantee business continuity.

Pros and cons of backups

Using snapshots and backups interchangeably is not recommended and can lead to data loss. It is crucial to understand the main differences between these two methods to create a robust data protection strategy.

The table below offers a clear comparison:

Modern data protection solutions designed for virtual environments are agentless, meaning that they don’t require an agent to be installed on each VM to protect it. They leverage VM snapshot technologies in VMware vSphere and Microsoft Hyper-V to create backups at the virtualization level. Once the backup is created, the VM snapshot is deleted. These are known as image-based VM backups, that is, point-in-time copies of VMs that include guest OS disks, configuration files and applications.

As hardware vendors develop new solutions, some backup vendors are starting to integrate these emerging technologies in their solutions. One such technology is storage snapshots that are leveraged by modern backup vendors to reduce the load on production resources that can come from regular VM snapshots, especially for very large VMs.

To ensure optimal data protection, create incremental VMware and Hyper-V backups, then store your data in a location different from the source machine. The NAKIVO solution provides you with all the features you need to protect virtual environments and allows you to diversify backup targets (local, public clouds, deduplication appliances, NAS, tape, etc.).