In today’s data protection landscape, there are numerous backup types that you can use to safeguard your data. When it comes to backing up separate files, many organizations rely on file-based backups and file sync solutions such as Dropbox, Google Drive and OneDrive. However, they are not the optimal choice since these types of solutions cannot ensure data recovery in case of data loss or corruption.

Image-based backup is a modern backup approach designed for today’s business IT infrastructures. It provides comprehensive data protection for the entire operating system, including files and other application data, and simplifies recoveries.

Image-based and file-based backups are used to achieve different goals. Although some may think that the two methods can be used interchangeably, a good understanding of each can help strengthen an organization’s data protection strategy. This post details the similarities and differences between the two methods.

Before we start
NAKIVO Backup & Replication is a comprehensive image-based data protection solution for virtual, physical, cloud and SaaS environments. You can also use the solution to protect network shares on NAS, Windows and Linux. Download the NAKIVO datasheet to learn more.

What Is File-Based Backup?

File-based backups are copies of individual files and folders. This backup approach operates at the file-system level to process source files. File-based backups work well when you generate and store a relatively small amount of data, especially if this data is platform-independent.

However, to perform file-based backups, you usually need a piece of software called an agent on the source computer and another copy of the agent on the target host (whether it is a home PC or a server in the cloud).

Note: Technically, it is possible to back up the operating system using the file-based backup method because the configuration of the OS is stored in files. However, while you are copying the content of one file, another one might be changed. Thus, even if all of the files from a source VM are copied, the backup will not be crash-consistent, complicating the recovery process later.

What Is Image-Based Backup?

Image-based backup is the process of backing up an entire virtual machine or physical machine along with the operating system, configuration files and system state. The entire backup is saved as one file known as an image.

Currently, most of the image-based solutions are agentless for virtual machines, though backup of physical machines requires the use of agents. Most virtualization solutions have a built-in mechanism to take snapshots (also known as checkpoints in Hyper-V). So, backup applications usually use the snapshots made by these inner services. Let’s take a closer look at how image-based backups are created.

How image-based backup is created

The following steps are necessary to create an image-based backup: 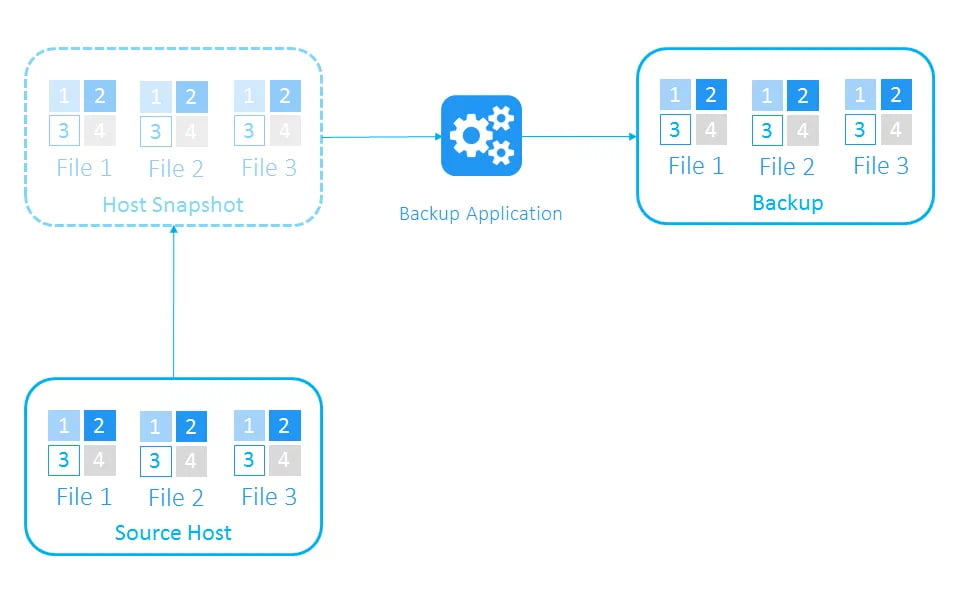 Download the Free Edition of the NAKIVO solution to check out all the advanced tools and functionalities that help you ensure data recoverability and business continuity.