VMware vSphere virtual machines deliver powerful capabilities that provide agile, versatile, and efficient environments for software. One of the very useful features in vSphere is the ability to take snapshots and revert to a VM’s previous state when needed using the snapshots. But this technology has its limitations.

In this post, learn about VMware snapshots and their use cases. We’ll also guide you through VMware snapshot best practices and explain how to create a snapshot in VMware vSphere Client and via PowerCLI.

Before we start
Though snapshots can be used for quick recovery after a failed update, they can’t substitute a dedicated backup solution like NAKIVO Backup & Replication. Download the Free Edition to get efficient backup and recovery for your VMware vSphere environment.

What Is a VMware Snapshot?

The main difference between backups and snapshots is that backups are VM copies that are independent of the source VM files while snapshots depend on the original VM. That is why even if a snapshot is a point-in-time version of a VM, including the VM’s files, state, and configurations, it can’t be used as a vSphere VM backup. If you use snapshots as backups, you may find yourself unable to recover data and VMs after a failure.

Often snapshots are used for quick “rinse and repeat” type operations, especially in a development environment. A snapshot may be created before a certain software process is tested on a virtual machine, like application testing, upgrades, updates, or patches. The virtual machine can then be quickly reverted to a previous state, bringing the VM back to the condition in which it was before running the software update, upgrade, and so on.

VMware does not support snapshots being run in production or long-term deployments of snapshots. They are not meant to be left in place for an extended length of time as they can lead to performance degradation or disk space issues if left unchecked.

Though snapshots are not equal to backups, they can be temporarily used to create a backup. For example, NAKIVO’s solution uses this technique for VMware VM backup. The solution takes snapshots of virtual machines to create a consistent VM backup even if the VM is running (when creating a host-level VM backup). After a VM backup has been created successfully, the snapshot is deleted.

In VMware’s implementation, virtual machine snapshots are comprised of the following set of files making up the snapshot file infrastructure:

By default, VMware snapshot files are located in the VM directory. But you can manually configure a custom directory to store snapshots for a VM by editing a VMX configuration file of the VM. This option can be useful when disk performance for the VM is not enough.

How Does the VM Snapshot Technology Work?

Now that we know what files are created when you take a snapshot in VMware environments, let’s look at the working principle behind the creation of a vSphere snapshot.

When a snapshot is created, the state of the virtual disk at the moment of taking the snapshot is maintained while all writes to the VMDK file are stopped. To capture changes, the system creates an additional VMDK file (delta disk) for every VMDK disk contained in the data store and writes changes to that file. If you take more than one snapshot, the system creates delta disks for each VMDK disk of every snapshot, representing differences between them.

A large chain of snapshots and the corresponding delta disk files reduce VM storage performance. When a VM needs to read data, the parent virtual disk VMDK file and related delta VMDK files (VMware snapshot files) must be read together in sequential order. This is needed to rebuild the data change (virtual disk input) history recorded in snapshot files and output the requested data for a VM. Snapshot files grow over time. Snapshots grow faster if intensive disk operations are performed on a VM (recording/deleting data).

When you delete a snapshot, the system merges the changes between the snapshots and previous disk states. All the data from the delta disk, which includes information about the deleted snapshot, is written to the original VMDK disk. The time needed for the deletion of a snapshot depends on the amount of data that has been written to the virtual disks since the last snapshot. Let’s look at how snapshots are deleted in different situations.

We have a base disk (VMDK) and two snapshots illustrated in the corresponding diagrams for our examples:

When using vSphere 5.0 and older algorithms, VMware snapshot files are consolidated by writing data to the parent snapshot disk first (Snapshot_2 to Snapshot_1 in our example), and then all snapshot data is committed to the base disk.

Deleting a snapshot after the current state

In the three previous examples, the VM state (marked You are here in the diagrams) represents the state after all the snapshots in the chain. In this example, the VM state is after the first snapshot and before the second snapshot (which is the last snapshot in this case).

How VMware snapshots are deleted

During the consolidation process, writes are made to both the active disk and base disk acknowledgements being sent.

How to Create a Snapshot in VMware vSphere Client 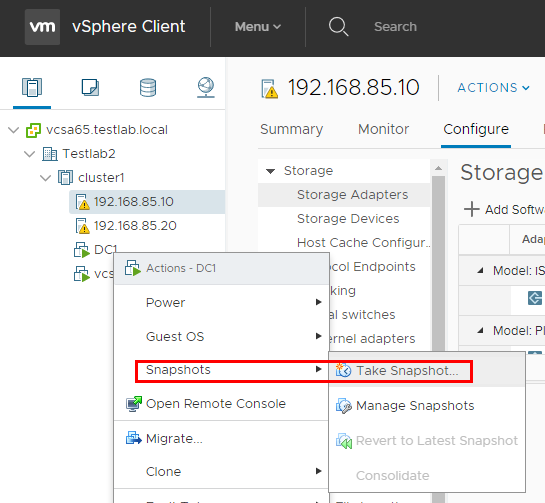 Note: When you select the Include virtual machine’s memory option, the Quiesce guest file system becomes inactive. You can select one of these options if a VM is powered on. 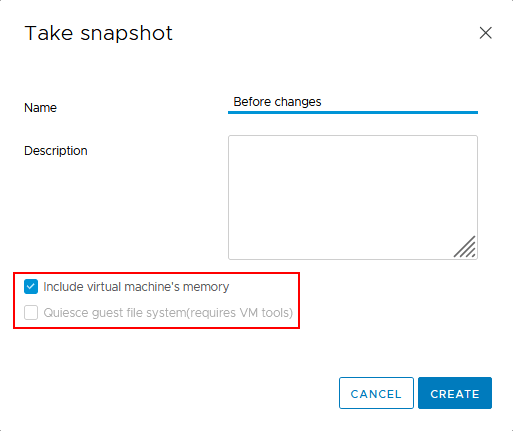 How to manage vSphere snapshots 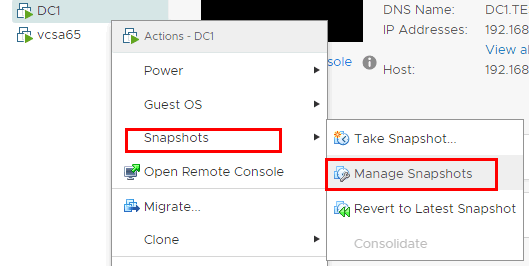 Other pertinent information is displayed as well, such as the snapshot name, time created, and disk usage. 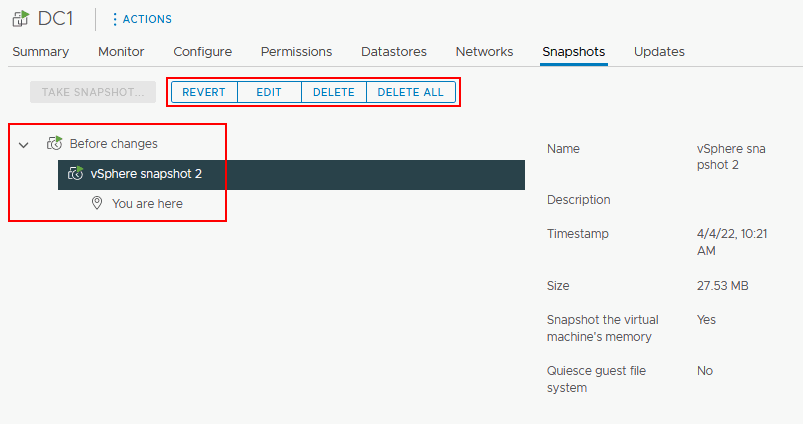 We are going to configure notifications to be sent when a snapshot’s size exceeds 30 GB. 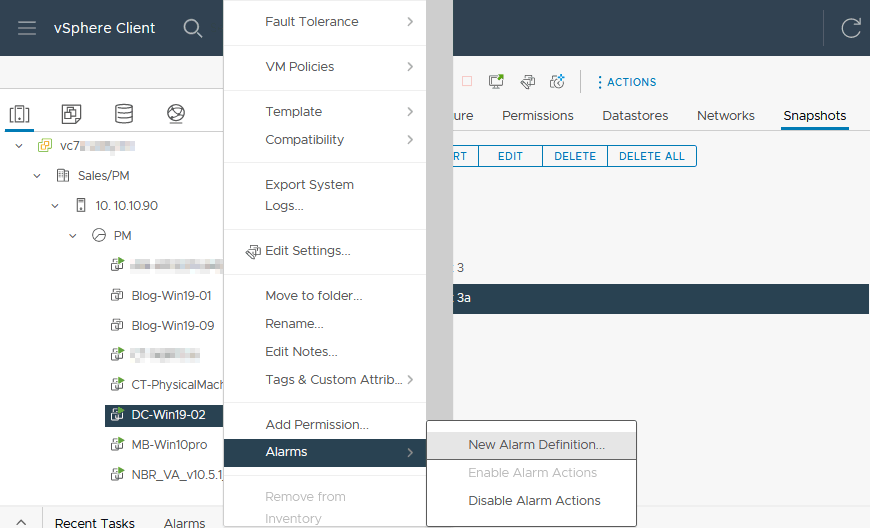 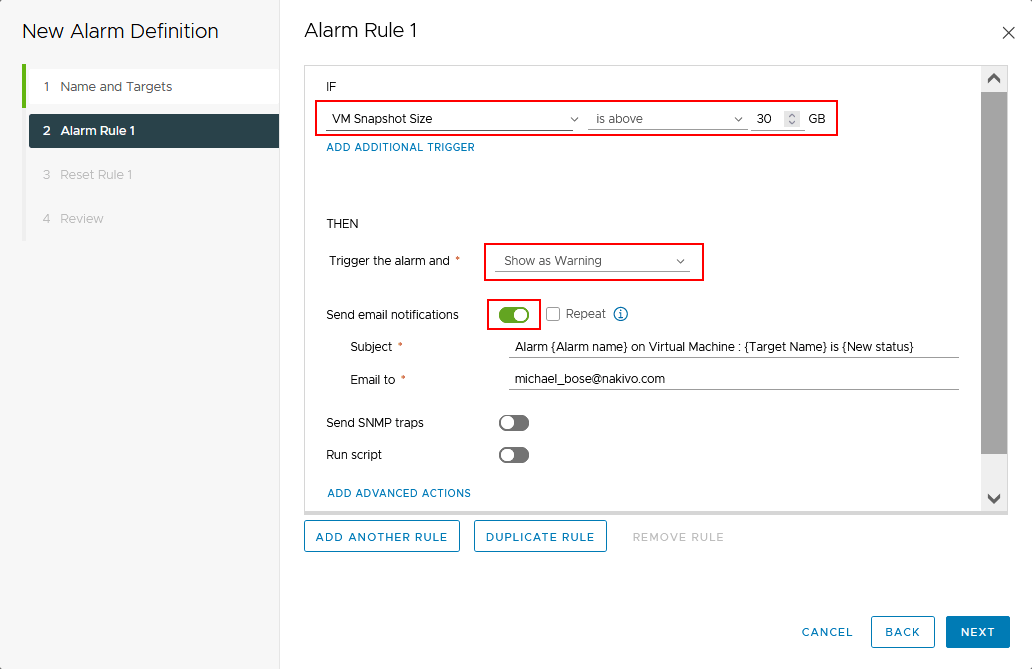 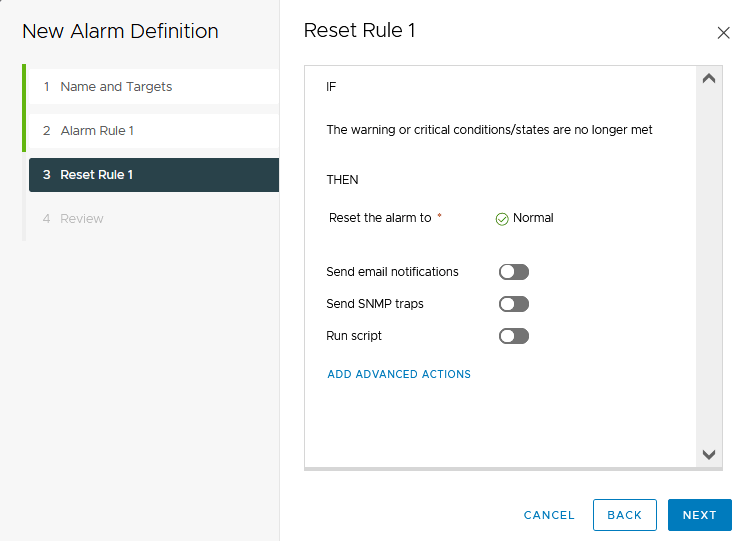 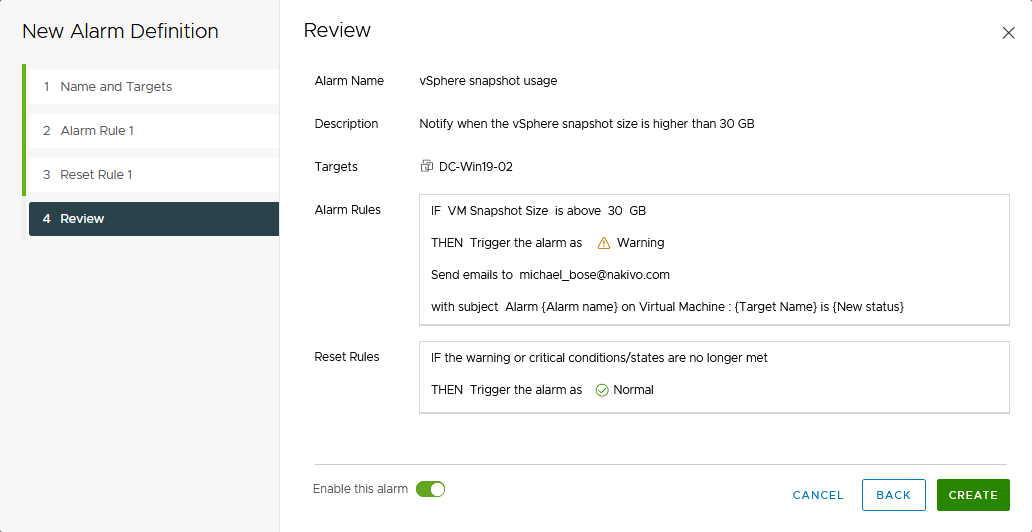 To learn how to work with vSphere snapshots in PowerCLI, check the next section.

How to Create Snapshots Using PowerCLI

A powerful way to interact with vSphere is by using PowerCLI. PowerCLI can be used to create, delete, and revert snapshots. Let’s look at some basic syntax to do this.

To create a snapshot using PowerCLI we can use the following syntax:

Reverting to a snapshot

To revert to a snapshot that was created, we can use the following syntax:

There are some limitations for vSphere snapshots you should know.

Try to follow these VMware snapshot best practices when working with snapshots.

Note: The command to show snapshots older than 72 hours:

Snapshots provide a powerful mechanism to allow reverting to a known state of a VMware virtual machine. This includes the files on disk, in memory, as well as the configuration present on the virtual machine at the time the snapshot was created. Especially in development environments, the use of snapshots can be very beneficial when testing code integration, updates, or other modifications that may need more than one run-through. By reverting back to a snapshot, you can quickly and efficiently get back to a known good state.

However, snapshots are not backups and should only be present in development environments and not in production. Additionally, they shouldn’t be left on a virtual machine for long periods of time as they can lead to performance degradation and excessive disk space usage. Use NAKIVO Backup & Replication to protect VMware vSphere data, apps, and machines. Download the Free edition to try the product in your own environment.