When creating a backup of a virtual or physical machine with running applications, especially applications that intensively write data to files and databases, ensuring backup data consistency is essential. Having consistent backup data facilitates recoveries without data corruption or delays. For this purpose, Microsoft developed the VSS technology.

This blog post explains what Volume Shadow Copy Service (VSS) is, how it works, and why this technology is important for backing up Windows-based virtual and physical machines.

Protect physical Windows machines with NAKIVO
Back up running Windows servers and workstations to onsite, offsite and to the cloud. Recover machines and application objects in minutes. With NAKIVO, you can easily maintain production continuity with the tightest RTOs even in a mixed IT infrastructure. Discover NAKIVO’s solution.

Volume Shadow Copy, also referred to as Volume Snapshot Service, is a set of COM (Component Object Model) interfaces in Windows, which provide the framework to create consistent backups for different applications. VSS was first released with Windows XP and Windows Server 2003.

Why You Need the VSS Technology

Application data consistency is important for VM and physical server backups. Consistency guarantees that the applications running on virtual or physical machines are fully functional after they are restored from a backup.

Without VSS, you get an inconsistent backup. Such a backup is created by just copying each block in the state that it is in at the time of being copied. Suppose that a file is continuously used by an application such as a database or a system application. This application is continuously changing data in the opened file by writing/deleting blocks. While the first part of the file is being copied, blocks used by other parts of the file are changing. By the time the other parts of the file are copied to the backup repository, the blocks in the first part have changed. What you get is data blocks that are not consistent and do not represent a single specific point in time.

This approach may work well for file systems with not a very high load, such as internal file storage or web servers. However, if the backup process starts at the moment when certain transactions are running, and I/O (input/output) operations are in place, data may be lost. When you are using applications or databases like Microsoft SQL Server, Active Directory, or Exchange Server, you cannot just close the file and then append data to it. Here, Volume Shadow Copy Service (VSS) can help. This technology allows creating point-in-time copies of files that are open and in use without compromising integrity and usability of these copies.

To understand how VSS works, we first need to go over the components that make up this feature. The high-level components of VSS are:

Snapshots are taken at the volume level, and VSS operates with blocks (and blocks are used by files). That is why you cannot take snapshots of files or folders. A shadow copy can be stored on the same volume or on another volume. The place on a volume allocated to storing shadow copies is called a diff area.

The VSS technology can be used as a Windows native tool to save point-in-time copies (snapshots) of disk volumes. The copies allow you to revert changes and go back to the saved state of the entire volume or particular files. Nevertheless, creating a true backup to be saved on an external medium is recommended for more reliable data protection.

VSS is an incremental procedure – Windows can create multiple volume snapshots one after another. After creating the first shadow copy, VSS tracks changes on disks by dividing data into 16-KB blocks. If there are changes on the disk, the service writes this entire block to a shadow copy. As a result, there is no need to copy the full data set with every new snapshot, and only changed blocks are copied.

Note that VSS snapshots that are triggered by a backup application are usually deleted after the backup job is completed.

You can use Windows native tools to manage volume shadow copies. Knowing how they work with snapshots can help understand the VSS technology better and troubleshoot possible issues (for example, a temporary VSS snapshot not deleted after creating a completed backup).

Some VSS options are available in the Windows GUI, but all options are accessible in the command line, which is more interesting for us. There are two VSS tools you can use in Windows PowerShell or CMD:

Note that these two utilities are different and work in different contexts. A shadow copy created in vssadmin cannot be managed in diskshadow and vice versa. You can see the snapshot created with a different tool, but you cannot do any actions with it.

VMware VMs running Windows use the VMware VSS component as a VSS driver in a guest Windows operating system for quiescing. The driver is installed when you install VMware Tools. In other cases, when using old Windows versions, a SYNC driver is used. Here’s a list of supported guest operating systems for application-aware quiescing in VMware environments.

How a Shadow Copy Is Created

There are two main approaches to writing data when creating a snapshot:

With so many different applications that can write data on disks, Microsoft created a unified interface with VSS to notify all applications that a snapshot is about to be created after initiating snapshot creation. The idea of the notification message is: A system will create a snapshot – stop your writing activities and flush writing buffers on disks to adopt the data into the consistent state.

The workflow to create a VSS snapshot is as follows:

Note: 20 seconds is a short period. If an application cannot fit in this time, the writers return an error, and the snapshot is not taken. If the storage performance is not enough to fit in this time limit, you can try upgrading your hardware to fix this issue. For example, you can change HDD to SSD storage devices. Alternatively, you can try to migrate other workloads to another storage and use dedicated storage only for the machine running Microsoft Exchange Server. Check logs to detect which writer failed the snapshot creation task.
Note: If the VSS providers take longer than 10 seconds to commit the shadow copy, the operation fails.
If you have VSS issues, a machine reboot can fix the issues in many cases when other methods don’t work. Some issues related to time limitations (for example, 10 seconds to create a snapshot) can be fixed by upgrading hardware, including disk devices, or by reducing loads.

Try to create a snapshot manually and check whether you fit the 20 seconds allotted (using Exchange Server as an example). In case of failure, reboot, reduce the loads, and try again.

We have explored how VSS works in general. Now let’s look at how the VSS technology works when creating VMware vSphere VM backups with dedicated backup software like NAKIVO Backup & Replication.

In a nutshell, the Volume Shadow Copy Service works as follows: The requestor initiates the VSS provider. The provider redirects the writers to write data into a log file and starts creating the volume snapshot. After the requestor sends the stop signal to the provider (usually after the snapshot is ready), it begins moving data from the log file to the volume.

In this case, NAKIVO Backup & Replication becomes a VSS requestor when backing up a VMware vSphere VM using VSS. 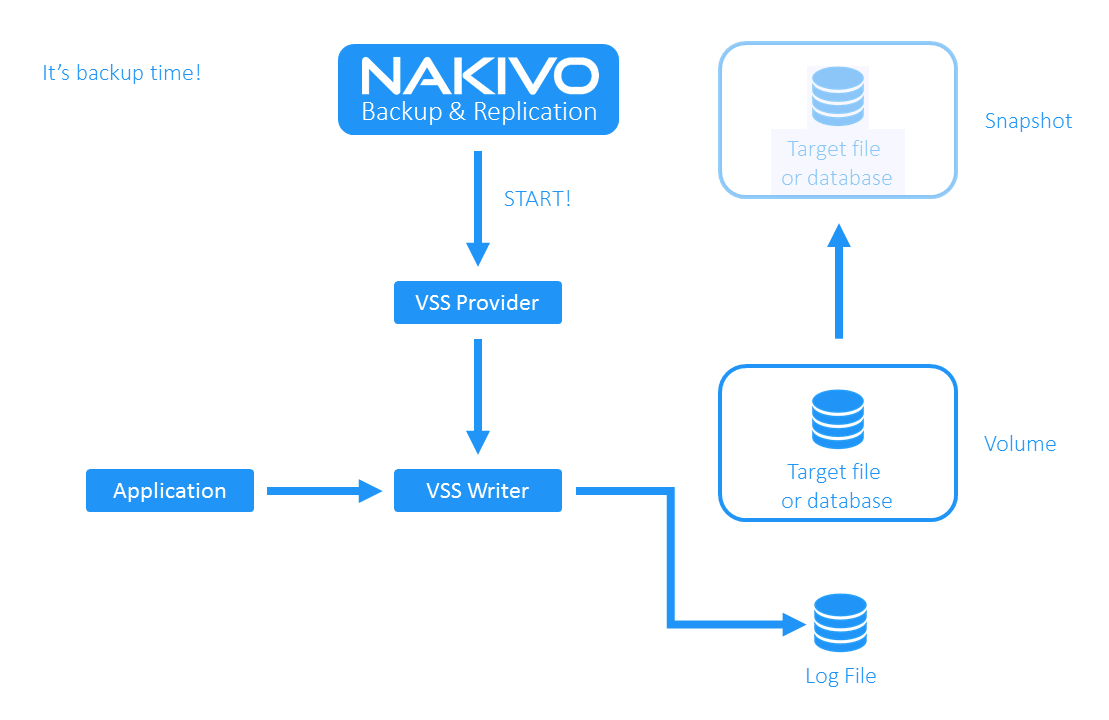 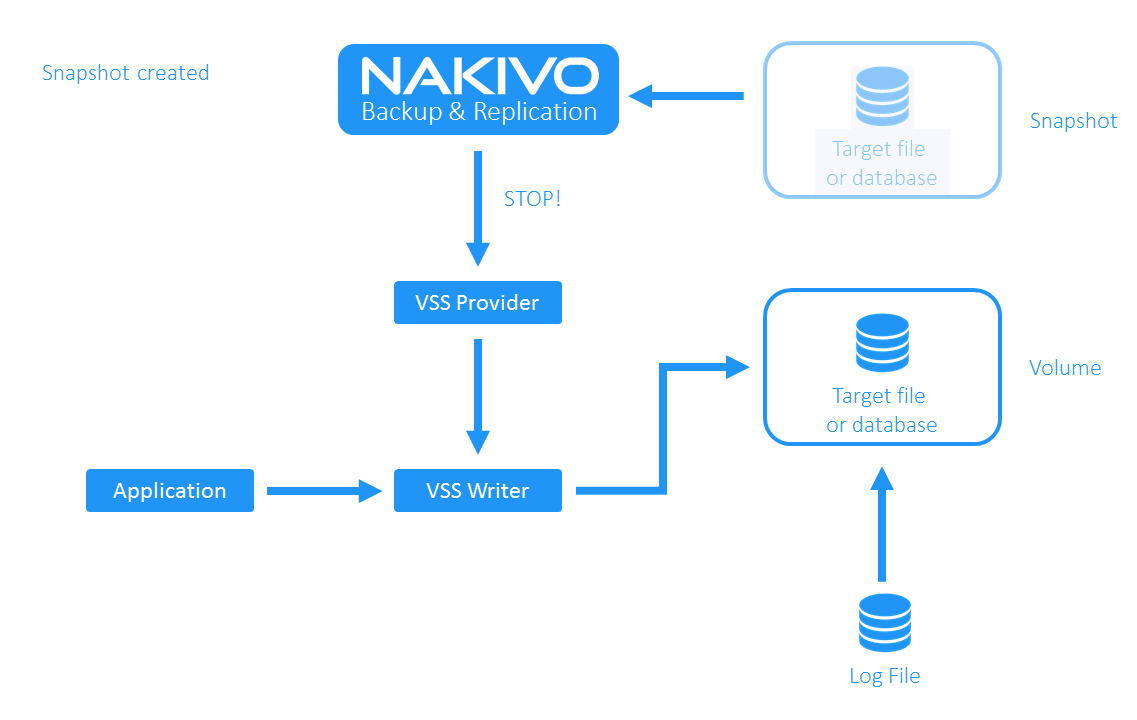 You can configure the application-aware mode for backup data consistency in the wizard at the Options step. This way you enable VSS in a machine running Windows for backing up of this machine.

Trade in your current data protection solution for NAKIVO Backup & Replication at special prices starting at $207/CPU socket (with a perpetual license) and find out first-hand why the NAKIVO solution is right for protecting your organization’s data. You can also download a free edition of the solution to try first.

Get free VMware VM protection for 1 year
Protect up to 10 VMware vSphere VMs for free with NAKIVO for 1 whole year. Get access to robust data protection capabilities, including flexible and reliable post-ransomware recovery without paying a penny. Download Free Edition.