Since 2008, Microsoft has provided two deployment options for the Hyper-V hypervisor – a standalone installation of Hyper-V Server and a Hyper-V role that can be added onto an existing Windows Server operating system. Which Hyper-V edition is better for you? Today’s blog post compares and contrasts Hyper-V Server 2016 with the Hyper-V role for Windows Server 2016. Licensing, installation, user interface, VM management, clustering, and use cases are explored. After reviewing each deployment type in detail, we explore their advantages and disadvantages to help you determine what option suits your virtual environment best.

The first type of deployment for Hyper-V reviewed in this blog post is the standalone Hyper-V Server 2016.

Hyper-V Server 2016 is distributed for free and can be downloaded from Microsoft's site. You can use Hyper-V Server 2016 for an unlimited period of time without paying anything and without activation, but there are no licenses provided for guest VMs running Windows. As a result, you must purchase licenses for guest Windows systems according to Microsoft’s license agreement. There are no licensing issues if you deploy VMs running Linux. Be aware that Microsoft prohibits the use of a standalone Hyper-V Server 2016 as a web server, file server, database server, or any other type of server whose role is not hosting virtual machines.

Similarly to Windows Server Core, Hyper-V Server is lightweight and has no GUI (graphical user interface); only a command line interface (CLI) is provided. You will not find any options related to Hyper-V in the console-based server configuration menu. You can create users, install updates, change computer names, manage network settings, enable remote management, shut down or restart the server, and exit to CMD. You can enter PowerShell from CMD. VMs can be created, deleted, started, stopped, renamed etc. with PowerShell. You can create, delete, start, and stop VMs on your instance of Hyper-V Server with PowerShell locally and remotely. If this VM management method is not convenient for you, use Hyper-V Manager remotely. For this, you need another Windows machine with the Hyper-V role installed. When you install the Hyper-V role on a Windows machine, Hyper-V manager is installed by default. Open Hyper-V Manager, connect to your headless Hyper-V Server 2016, and manage your VMs. As an alternative to Hyper-V Manager, you can use another GUI tool for centralized management called System Center Virtual Machine Manager (SCVMM). Note that while Hyper-V Manager is free, you have to pay for SCVMM.

Clustering is supported by Hyper-V Server 2016. The requirements are the same as the requirements for a Hyper-V Failover Cluster built on Windows Server 2016 nodes with the Hyper-V role installed. The entire cluster configuration can be done with PowerShell.

The free Hyper-V Server 2016 is a nice solution for virtualizing existing Windows servers and Windows desktops that are already licensed, as well as running Linux machines that don’t require licenses. Hyper-V Server 2016 can also be used for educational and testing purposes or for companies that do not have high numbers of VMs that must be licensed.

Let’s now explore the same categories for the Hyper-V role on Windows Server 2016.

A paid license must be applied to Windows Server 2016 on a per-core basis (except for the Essentials edition – but using this is not rational for Hyper-V). You can select the Standard or Datacenter edition. The Windows Server 2016 Standard edition includes licenses for two Windows-based Hyper-V virtual machines and is suitable for smaller virtualized environments. Windows Server 2016 Datacenter Edition includes licenses for unlimited numbers of Hyper-V virtual machines running Windows, and accordingly is recommended for highly virtualized environments. Moreover, the Datacenter edition allows you to deploy shielded VMs and use Storage Spaces Direct, with storage replicas and a software-defined networking stack.

If you have installed Windows Server 2016 in the GUI mode and enabled the Hyper-V role, then you can use Hyper-V Manager to manage VMs residing on a local server and VMs residing on remote servers. You can also use PowerShell or System Center Virtual Machine Manager (SCVMM). 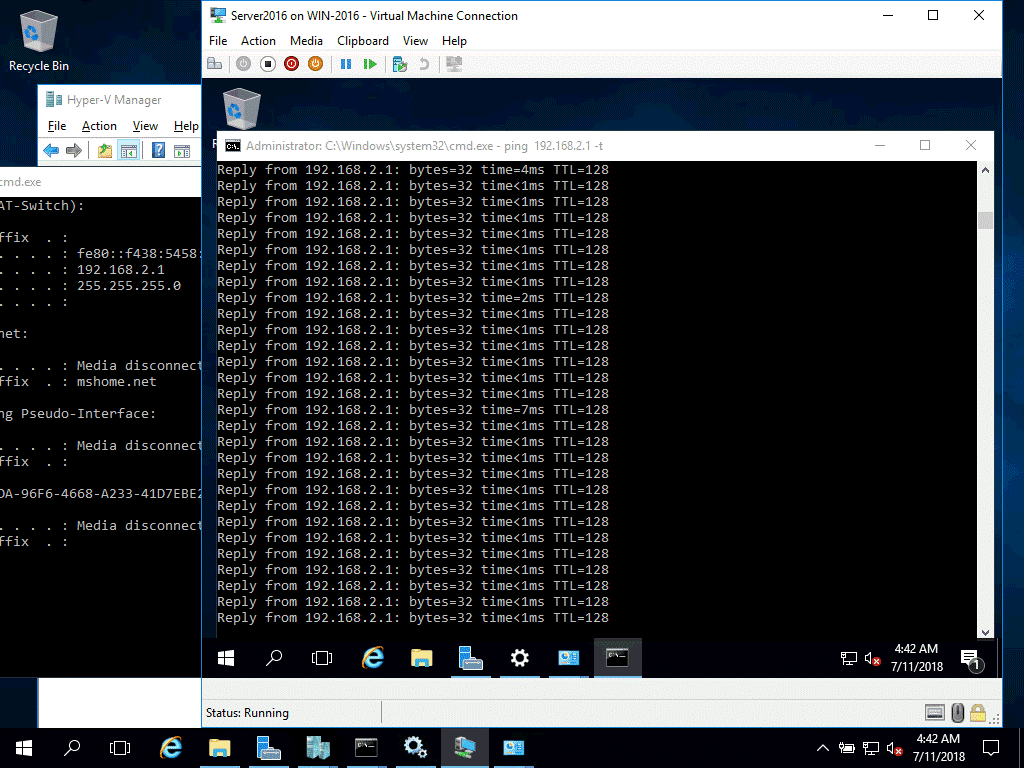 Advantages and Disadvantages of the Two Hyper-V Deployments

Each type of Hyper-V deployment has its own advantages and disadvantages. This section outlines the pros and cons of the standalone Hyper-V Server 2016 and Windows Server 2016 with Hyper-V.

Hyper-V Server 2016, similarly to Windows Server 2016 Core, does not include Windows Explorer, which is the main component of Windows graphical shell. (Internet Explorer is a part of Windows Explorer.) This is a less user-friendly solution, but it improves security. In the GUI mode, even if you use only tools such as MMC (Microsoft Management Console) for server management, without using Internet Explorer, Internet Explorer is still present in your system and could constitute a threat for your server. This is the reason many IT specialists may prefer installing the Core Edition of Windows Server operating system in some situations.

At the same time, some basic graphics features used for displaying windows that are not Explorer-related are available in the headless edition of Windows Server 2016 and Hyper-V Server 2016. For example, you can press Ctrl+Shift+Esc to run the Windows Task Manager.

One additional advantage of the standalone Hyper-V Server is that the smaller number of included components means you need less frequent updates (patches) and, as a result, fewer reboot events for the server.

Regardless of which edition of Hyper-V you decide to use in your environment, remember to back up your virtual machines. NAKIVO Backup & Replication can back up VMs running on standalone Hyper-V Server 2016, VMs running on Windows Server 2016 with the Hyper-V role, and VMs running in a Hyper-V Failover Cluster. Request a demo with one of our engineers to see for yourself how you could improve your Hyper-V data protection easily and effectively!