What Is Deduplication in Backup Data Storage

Today’s large virtual infrastructures generate a vast amount of data. This leads to an increase in backup data and in expenditure on backup storage infrastructure, which includes storage appliances and their maintenance. For this reason, network administrators look for ways to save storage space when creating frequent backups of critical machines and applications.

Data deduplication is a storage capacity optimization technology. Data deduplication involves reading the source data and the data already in storage to transfer or save only unique data blocks. References to the duplicate data are maintained. By using this technology to avoid duplicates on a volume, you can save disk space and reduce storage overhead.

The predecessors of data deduplication are the LZ77 and LZ78 compression algorithms introduced in 1977 and 1978 respectively. They involve replacing repeated data sequences with references to the original ones.

This concept influenced other popular compression methods. The most well-known of these is DEFLATE, which is used in PNG image and ZIP file formats. Now let’s look at how deduplication works with VM backups and how exactly it helps save storage space and costs spent on infrastructure.

What Is Deduplication in Backup?

During a backup, data deduplication checks for identical data blocks between the source storage and target backup repository. Duplicates are not copied, and a reference, or pointer, to the existing data blocks in the target backup storage is created.

How Much Space Can Data Deduplication Save You?

To understand how much storage space can be gained with deduplication, let’s consider an example. The minimum system requirements for installing Windows Server 2016 is at least 32 GB of free disk space. If you have ten VMs running this OS, backups will total at least 320 GB, and this is just a clean operating system without any applications or databases on it.

The odds are that if you need to deploy more than one virtual machine (VM) with the same system, you will use a template, and this means that initially, you will have ten identical machines. And this also means that you will get 10 sets of duplicate data blocks. In this example, you will have a 10:1 storage space saving ratio. In general, savings ranging from 5:1 to 10:1 are considered to be good.

The data deduplication ratio is a metric used to measure the original data size versus the data’s size after redundant portions are removed. This metric allows you to rate the effectiveness of the data deduplication process. To calculate the value, you should divide the amount of data before deduplication by the storage space consumed by this data after being deduplicated.

For example, the 5:1 deduplication ratio means that you can store five times more backed-up data in your backup storage than it is required to store the same data without deduplication.

You should determine the deduplication ratio and storage space reduction. These two parameters are sometimes confused. Deduplication ratios don’t change proportionally to data reduction benefits as the law of diminishing returns is bound to come into play beyond a certain point. See the graph below. 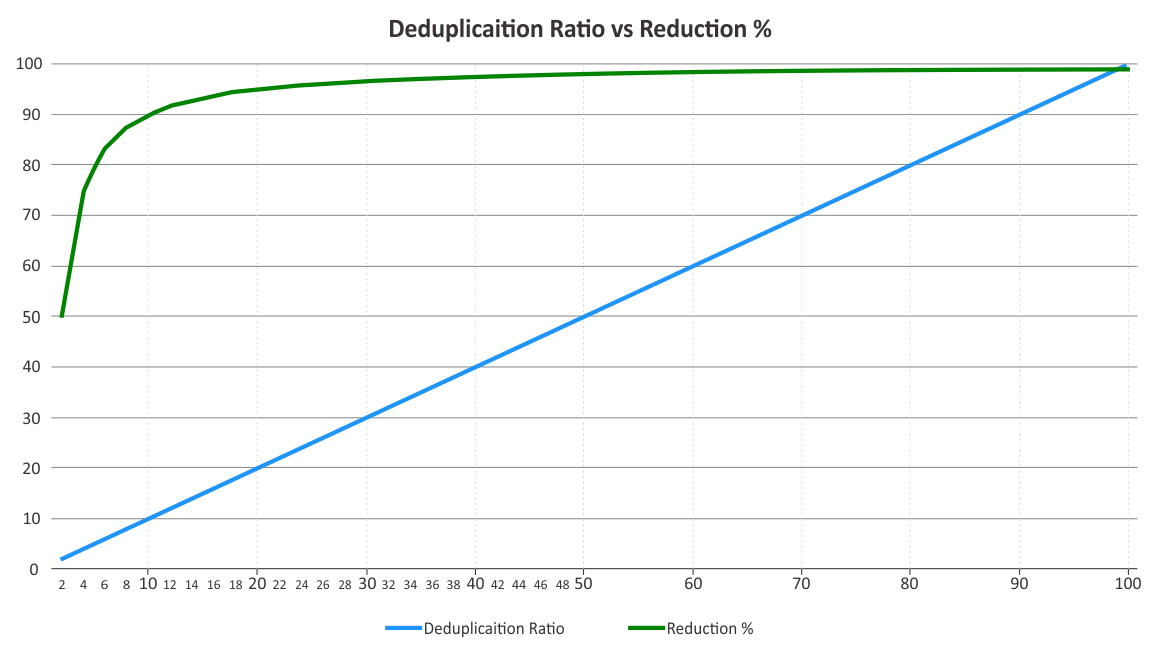 This means that the lower ratios can bring more significant savings than the higher one. For example, a 50:1 deduplication ratio is not five times better than a 10:1 ratio. The 10:1 ratio provides a 90% reduction of the consumed storage space, while the 50:1 ratio increases this value to 98%, given that most of the redundancy has already been eliminated. For more information on how these percentages are calculated, you can see Storage Networking Industry Association’s (SNIA) document on data deduplication.

It is difficult to predict data reduction efficiency until the data is actually deduplicated due to several factors. The following are some of the factors that have an impact on data reduction when using deduplication:

The backup deduplication techniques can be categorized based on the following:

Where data deduplication is done

Target-side deduplication first transfers the data to the backup repository and then performs deduplication. The heavy computing tasks are performed by the software responsible for deduplication.

When data deduplication is done

Backup deduplication can be inline or post-processing.

How data deduplication is done

The most common methods to identify duplicates are the hash-based and modified hash-based ones.

Backup deduplication is one of the most popular use cases of deduplication. Still, you need to have the appropriate software solution and hardware for storage to implement this data reduction technology.

NAKIVO Backup & Replication is a backup solution that supports using the global target post-processing deduplication with modified hash-based duplicates detection. You can also take advantage of source-side deduplication by integrating a deduplication appliance such as DELL EMC Data Domain with DD Boost, NEC HYDRAstor and HP StoreOnce with Catalyst support with the NAKIVO solution.