NAKIVO Blog > Cloud > AWS > AWS Lambda vs. Amazon EC2: Which One Should You Choose?

AWS Lambda vs. Amazon EC2: Which One Should You Choose?

Amazon is one of the leaders in providing diverse cloud services, boasting several dozen and counting. Amazon EC2 is one of the most popular Amazon services, and is the main part of Amazon Cloud computing platform that was presented in 2006. Amazon EC2 is widely used nowadays, but the popularity of another Amazon service called Lambda (introduced in 2014) is also growing. AWS Lambda vs EC2 – which one is better? Today’s blog post compares these two platforms to help you make the right choice for your environment. The main sections of the blog post are:

AWS EC2 (Amazon Web Services Elastic Compute Cloud) is a service that allows for using virtual machines called EC2 instances in the cloud and providing scalability. You can change the amount of disk space, CPU performance, memory etc. whenever you need. You can select the base image with the necessary pre-installed operating system (OS) such as Linux or Windows and then configure most OS settings as well as installing custom applications. You have the root access for your Amazon EC2 instances and can create additional users. Manage everything you need and fully control your EC2 instances including rebooting and shutting down the instance. The category of AWS EC2 web service is known as Infrastructure as a Service. AWS EC2 can be used for cloud hosting – you can deploy servers as virtual machines (instances) in the cloud.

What Is AWS Lambda?

AWS Lambda is a computing platform that allows you to run a piece of code written on one of the supported programming languages – Java, JavaScript, or Python when a trigger linked to an event is fired. You don’t need to configure a virtual server and environment to run an application you have written. Just insert your program code (called Lambda function in this case) in the AWS Lambda interface, associate the Lambda function with the event and run the application in the cloud when needed, without taking care of server management and environment configuration. This way, you can focus on your application, not on server management—this is why AWS Lambda is referred to as serverless.

An event after which your application is executed can be uploading a file to the Amazon S3 bucket, making changes in DynamoDB tables, getting an HTTP request to the API Gateway service, etc. After configuring a function to run when an event occurs, your application will be executed automatically after each new event.

As for classification, Lambda is an implementation of Function as a Service (FaaS) by Amazon. On the table below, you can see the level of management for each service type starting from using physical servers and compare them. The lowest levels (required user management) are marked with a green color and the upper levels (provided provider management) are marked with a blue color. Thus, when using physical servers, you can manage hardware and all upper levels. When using Infrastructure as a service (IaaS) such as AWS EC2, you can manage operating systems on provided virtual machines (EC2 instances). On the Platform as a Service (PaaS) level, you can run your application that must be compiled before running. When using Function as a Service (FaaS) such as AWS Lambda, you don’t need to compile your application – just insert your code in the interface provided by MSP (managed service provider). SaaS (Software as a Service), that is mentioned for comparison in the table, allows you only to use ready-made applications (applications made by vendors) in the cloud by using a thin client or a web browser. 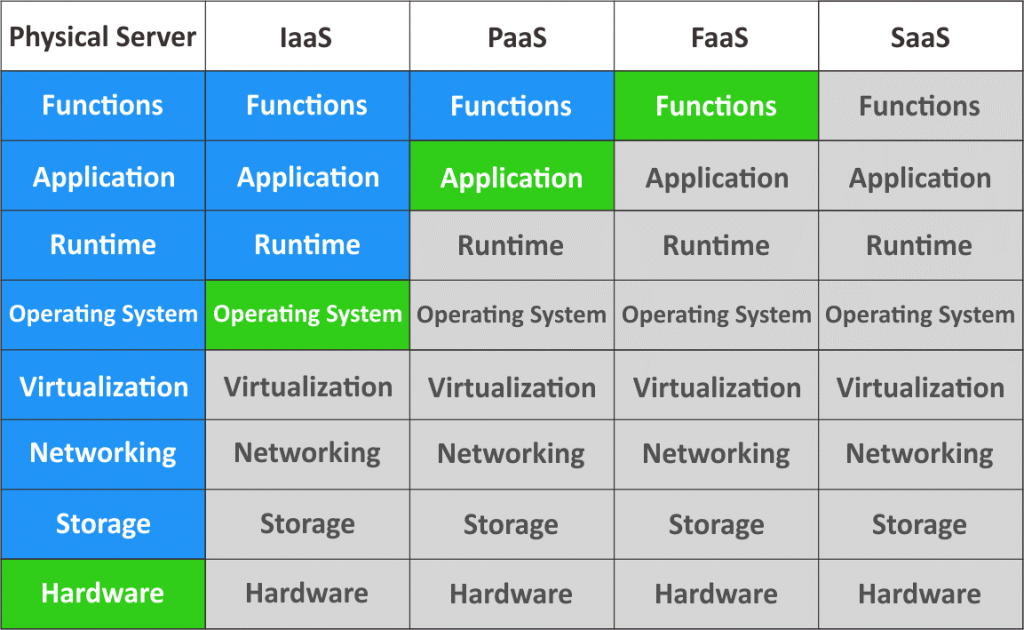 AWS EC2 vs Lambda: Use Cases

AWS EC2 has a wide range of use cases since almost everything can be configured when using this service. The most common use cases of AWS EC2 are:

General use cases of AWS Lambda:

Let’s consider a particular example. Imagine that your web site uses an Amazon S3 bucket to store web-site content including pictures, videos, audio files, etc. When a new image or video file is uploaded, you need to create a preview image for your web page that is used as a link to a full size image or video file. Creating preview images manually can be a boring and time-consuming task. In this case, you can create a Lambda function that can automatically resize the image based on the uploaded picture, rename that image, and store the target image in the appropriate directory. You can configure the Lambda function to be executed right after the event of uploading the original image file to the Amazon S3 bucket used by your web site.

EC2. As you may recall, when using AWS EC2, you operate with virtual machines (VMs) known as EC2 instances. You can add virtual hardware (virtual disks, network interfaces, processors, memory) to an EC2 instance, as well as start, stop, and reboot a VM instance. EC2 instances can work with two storage types – Elastic Block Storage (EBS) and S3 buckets. You can use a pre-configured image with an installed operating system and create your customized Amazon Machine Image (AMI). The EC2 cloud service provides automatic scaling and load balancing. EC2 instances can work in conjunction with most other Amazon web services, such as S3, ECS, Route53, Cloudwatch, etc.

Lambda. When using AWS Lambda, your application (Lambda function) is running in a container that is seamless for you. The container contains code and libraries. Resources are provided by Amazon in accordance with application needs, and scaling is automatic and seamless. You cannot control neither a container running your application nor an EC2 instance on which the container is running (you don’t know anything about them because the underlying infrastructure is unavailable for Amazon Lambda users). Refer to the table above.

AWS Lambda can be considered as a framework of EC2 Container Service (ECS) that uses containers to run a piece of code that represents your application. The life cycle of each container is short. The running Lambda function doesn’t save its state. If you want to save results, they should be kept in some data storage, for example, in an Amazon S3 bucket. It is possible to configure a virtual network for a Lambda function, for example, for connecting to Amazon RDS (Amazon Relational Database Service). Lambda consists of multiple parts: layers, function environment, and a handler. Triggers are Lambda activators. Lambda is one function that is executed by queries from triggers.

EC2. A complex system of snapshots is available for EBS (Elastic Block Storage) volumes of AWS EC2 instances. You can create incremental snapshots and roll back to the needed state of an EC2 instance. Multi-volume snapshots can be used for critical workloads, for example, databases that use multiple EBS volumes.

Lambda. A convenient versioning system is supported for better management of Lambda functions. You can assign a version number to each uploaded copy of code and then add aliases that are pointed to the appropriate code version. Each version number starts from 1 and incrementally goes up. You can categorize Lambda functions to alpha, beta, and production, for example. The Amazon Resource Name is assigned to each Lambda function version when publishing and cannot be changed later.

Lambda. There are permissions to AWS services to which Lambda has access by default. The IAM role is used to define services that must be available for a Lambda function. For each Lambda, you should configure the IAM Role on behalf of which Lambda function will be launched. It means that after configuring the IAM role, you will be able to connect your Lambda function to the defined Amazon services without using keys or other authorizing parameters.

Compared to EC2 instances, Lambda functions don’t require security updates and patches. Underlying containers and operating systems are updated automatically by Amazon. This is the advantage of using Lambda functions in terms of security.

1000 to 3000 Lambda instances can be executed simultaneously, depending on the region. Contact AWS support if you are interested in running more instances simultaneously.

The cold startup time is a drawback of Lambda functions. Latency occurs when a function is not executed for a durable period of time, and time is needed to start a container and run the function in  Amazon Cloud. Using AWS Lambda for running applications may be a good solution when you have uneven workloads, and applications must be run in different periods of the day with long pauses between application executions.

Both EC2 and Lambda cloud services use the pay-as-you-go principle. However, let’s consider details and differences.

Today’s blog post has compared AWS EC2 and AWS Lambda because AWS Lambda vs EC2 is a popular topic nowadays. AWS EC2 is a service that represents the traditional cloud infrastructure (IaaS) and allows you to run EC2 instances as VMs, configure environments, and run custom applications.

AWS Lambda is the implementation of Function as a Service by Amazon that allows you to run your application without having to worry about underlying infrastructure. AWS Lambda provides you a serverless architecture and allows you to run a piece of code in the cloud after an event trigger is activated. When using AWS Lambda, you have a scalable, small, inexpensive function with version control. You can focus on writing code, not on configuring infrastructure.

Using AWS EC2 is good for running high-performance applications, long-running applications, and the applications that must not have a delay at the start time. If you use AWS EC2 instances, don’t forget to back them up to avoid losing your data. NAKIVO Backup & Replication is an all-in-one data protection solution that can protect EC2 instances in addition to VMware vSphere VMs, Hyper-V VMs, and physical servers. Download NAKIVO Backup & Replication now and try it in your cloud environment.