In the example used in this article, multiple ESXi hosts are managed by VMware vCenter Server.

Enter your user name in the domain\username format and then enter your password. You can use an administrative account or another account that has enough permissions to create virtual machines in vCenter. Click Login. 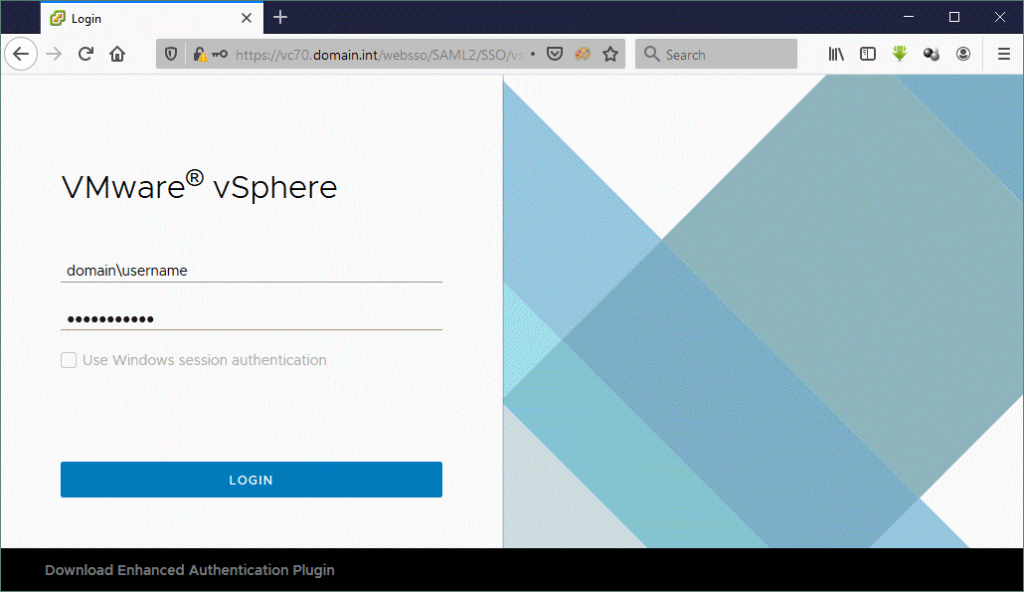 Once you have logged in to vCenter 7, click Hosts and Clusters, select your data center, and click the ESXi host on which you want to create a new virtual machine. In our case, we are going to create a VM on the ESXi 7 host with IP address 10.10.20.86. After selecting the ESXi host, make sure that there are enough free resources available, such as CPU, memory, and storage capacity. Click Actions > New virtual machine to start creating a new VM on the selected ESXi host by using VMware vSphere Client. 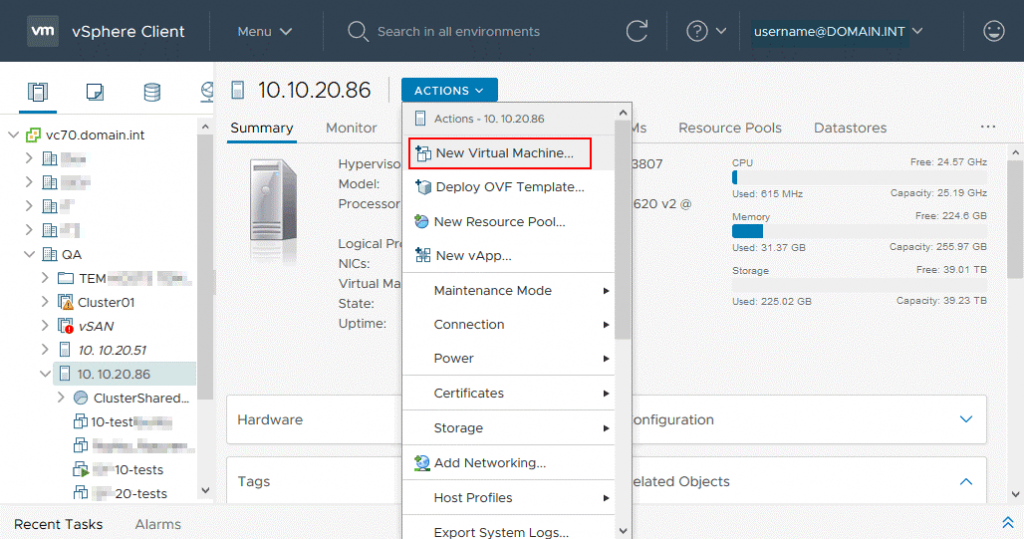 1. Select a creation type. Click Create a new virtual machine because you need to create a new VM from scratch. If you need to clone a VM or deploy a VM from a template, choose one of the other options. Click Next at each step to continue. 2. Select a name and folder. Enter a name for the new virtual machine. As we are going to install Ubuntu Linux on the new VM, the name of the VM used in this example is blog-Ubuntu1. Then select a location for the virtual machine. We will store the new VM in the QA data center. 3. Select a compute resource. Select the ESXi host to run a new virtual machine. As we want to create a new VM on the ESXi host with IP address 10.10.20.86, we select this host in the list. Compatibility checks succeeded means that everything is correct and you can continue. 4. Select storage. Select a datastore where the virtual machine files, including the virtual disk files, will be stored. Make sure that there is enough free space on the selected datastore. In this example, the 86-HDD-R1 datastore is selected. The available options are:

Selecting the correct guest OS in the list allows the wizard to provide the suitable default configuration of the VM for installing an operating system on the VM.

7. Customize hardware. Configure virtual hardware for the virtual machine. Click the type of hardware to expand settings. In most cases, you can leave the default settings except for:

CPU – select the number of processors and CPU cores.

Memory – define the amount of RAM. New Hard disk – select the size of a virtual hard disk and the provisioning type. You can select Thin Provision, Thick Provision Lazy Zeroed, or Thick Provision Eager Zeroed. Read more about Thick and Thin provisioning in the blog post. If your new VM needs to use multiple virtual disks, you can create more disks by clicking Add New Device > Hard disk. Similarly, you can add network adapters, CD-ROM, and other devices. It is possible to edit VM settings after VM creation. Thin Provision is used in the current example.

New Network. Select the network to which a virtual network adapter of the VM must be connected. Read more about virtual switches and virtual networks in this blog post. In this example, we connect the new VM to the 10.10.23.0/24 network.

Client Device – an optical disc inserted into a CD/DVD drive on a client machine is used to boot the operating system installer. You need to insert an optical medium into the DVD-ROM of the computer on which you’re using VMware vSphere Client.

Datastore ISO File. Upload an ISO image of the installation disc to the datastore attached to the ESXi host on which you are creating a new VM and are going to install an operating system. Then select the ISO file uploaded on the datastore.

For Status, select the “Connect At Power On” checkbox.

8. Ready to complete. Check configuration for your new VM and hit Finish to create the new VM. If you forgot to configure some settings, go back and edit the needed settings. If you click the display preview of a running virtual machine, a window with two options will be displayed. Select Web Console or VMware Remote Console similarly as explained above. On the next screenshot, you can see how a VM running on ESXi 7 can be managed in VMware Workstation. You can see a warning message in the web interface of VMware vSphere Client that VMware Tools are not installed on this virtual machine. If you click Install VMware Tools on this page, a virtual ISO disk that contains the VMware Tools installer will be mounted to the VM.

The confirmation message is displayed if you click Install VMware Tools. As we are using Linux as a guest operating system on our virtual machine, it is better to install VMware Tools from online software repositories for the current Linux distribution (Ubuntu in this case). The latest version of VMware Tools is available in online repositories.

Run the command to install VMware Tools for Ubuntu with a graphical user interface (GUI):

If there is only the command line interface in your Ubuntu Linux, run this command:

After installing VMware Tools, it is recommended to reboot the virtual machine. Then you can see the running status of VMware Tools and the VMware Tools version.

This blog post has covered a creation process of a new VM in VMware vSphere 7. Creating a new virtual machine in VMware vSphere Client 7 provided by vSphere 7 is similar to creating a new VM in the previous vSphere versions such as vSphere 6.7 and vSphere 6.5. Using vSphere Client is not the only option to create a new VM. You can also create a new VM on an ESXi host by using VMware Workstation after connecting to vCenter Server or ESXi host. Another method is to use VMware Host Client by connecting to an ESXi host in a web browser (it must be allowed by vCenter if the ESXi host is managed by vCenter). VMware PowerCLI can be used to create new VMs on ESXi hosts if you want to create a high number of VMs and automate this process.