NAKIVO Blog > Hyper-V Administration and Backup > Hyper-V VM Management > Virtualization Applications Are Not Working: What Do You Do?

Virtualization Applications Are Not Working: What Do You Do?

After you install VMware Workstation, VMware Player, or Oracle VirtualBox on a Windows machine, you might get errors when starting a VM in these virtualization applications. The errors occur even if Hyper-V VMs are not running at that time. You can install VMware Workstation and VirtualBox, and run VMware VMs and VirtualBox VMs on the same computer, but not simultaneously. What causes this problem with Hyper-V? Let’s take a closer look. This incompatibility is caused by Hyper-V because virtualization extensions are not exposed to type 2 hypervisors installed on a Windows machine where the Hyper-V role is enabled.

BSOD, such as BSOD with SYSTEM_SERVICE_EXCEPTION

A VirtualBox VM works too slowly and uses the paravirtualisation (emulation) mode.

The most interesting situation is when a user doesn’t install Hyper-V and still encounters one of the errors mentioned earlier when using VMware Workstation or VirtualBox. The error occurs when automatic Windows updates are enabled. With the updates (Windows 10 v1607 and the appropriate Windows Server versions starting from Windows Server 2016), some new Hyper-V-related features are installed and enabled automatically without Windows user consent. These features are Device Guard and Credential Guard. Windows updates known vulnerabilities but can add issues and destroy a working configuration. That’s why many users don’t like automatic updates.

Credential Guard is a feature to minimize the impact of attacks if malicious code is already running by isolating system and user secrets to make more difficult to compromising.

Virtualization Based Security (VBS) is a class of technologies that uses virtualization extensions, including VSM, to provide security in Windows. The Hyper-V role is required to make these features work (Hyper-V management tools are not needed).

The hypervisor (Hyper-V) loads first, and then the operating system (Windows) loads. Hyper-V provides an abstraction layer between hardware and the operating system. A VSM allows the tagging of specific critical processes and memory used by them as they belong to a separate independent operating system controlled by Hyper-V. The principle is similar to the isolation of two VMs running on a Hyper-V host when each VM can use only the hardware resources provisioned to it. Note: If you need a type 1 hypervisor from VMware, use VMware ESXi and VMware vSphere environment. Learn more in these blog posts: Hyper-V vs VMware, VMware Workstation vs VMware Player, and How to install ESXi on Hyper-V.

Let’s explore how to resolve the incompatibility issue of Hyper-V and other virtualization applications in detail.

Method 1: Uninstall Hyper-V in the GUI

Check system information about Windows configuration by running the following command in CMD:

A System Information window opens. On the following screenshot, you see that Hyper-V is enabled (a hypervisor has been detected), and Device Guard Virtualization-based security is running. Now you can remove these features. You should be aware that the following Hyper-V related features will not be available after you remove Hyper-V:

In Windows 10, open Control Panel, click Programs and Features, then click Turn Windows features on or off. The steps for removing Hyper-V on Windows 10 and Windows Server 2016 are similar. 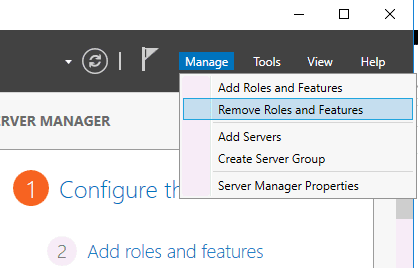 Method 2: Use PowerShell to Disable the Hyper-V Feature

You can do a similar action by using the command-line interface rather than the GUI.

Log in to PowerShell as Administrator, and run the command to disable the Hyper-V feature:

The idea behind this method is to edit boot configuration data and disable booting of Hyper-V without uninstalling the Hyper-V role.

Log in to PowerShell as Administrator, or run the command from an elevated command prompt to disable Hyper-V:

If you need to re-enable Hyper-V and set the default value back, run this command:

Set the HiberbootEnabled parameter to 0

Once your computer has restarted, you should see two options in Windows Boot Manager. If you want to remove the No Hyper-V boot entry, use the /delete option for bcdedit.

A list of all entries with their identifiers is displayed in the output. Copy the ID of the entry which you want to remove, and run the following command:

Method 4: Uninstall the Hyper-V Role in PowerShell with dism.exe

The idea behind this method is to use the Deployment Image Servicing and Management tool in the command-line interface to uninstall Hyper-V.

Log in to CMD or PowerShell as Administrator. Run the following command to uninstall Hyper-V:

If you want to install Hyper-V again, use this command:

Method 5: Turn off virtualization Based Security in Windows

This method is used to disable Device Guard and Credential Guard, which are Hyper-V-related features.

Double-click Turn On Virtualization Based Security. By default, the status of this setting is Not configured. In the window that opens, select Disabled and hit OK to save settings, and close the window. 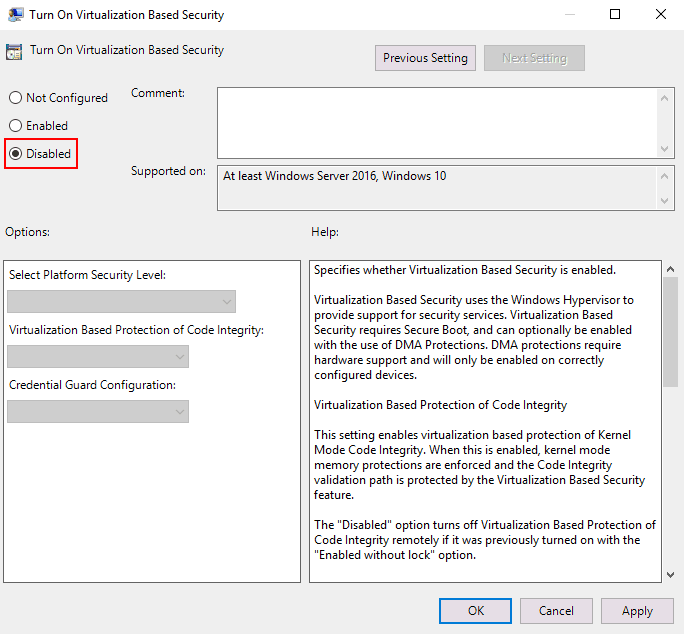 Edit Registry as an alternative

In Windows 10 Home, where the Group Policy Editor is not present, you can disable Virtualization Based Security in Windows Registry.

Create a backup of the Windows registry before changing registry settings to avoid errors and issues.

Open Registry Editor. Run regedit in the command line that should be opened as Administrator. Create a new registry entry in the Lsa directory. Right-click an empty space in the right pane of the Registry Editor window. In the context menu, click New > DWORD (32-bit) Value.

Enter the LsaCfgFlags name for this value. This value must be set to 0. Close the Registry Editor, and restart your computer.

You can run the following commands in PowerShell (as Administrator) to disable Device Guard and Credential Guard on the next Windows boot.

Mont a UEFI system partition to the drive X: (select an unused volume):

Copy the C:\Windows\System32\SecConfig.efi to X:\EFI\Microsoft\Boot\SecConfig.efi with an option to overwrite the file if the file exists. This file is a boot image for Windows security configuration tool.

Set the boot option you created to boot at the previous step to \EFI\Microsoft\Boot\SecConfig.efi:

Set Windows Boot Manager to make the new entry the default one for the next reboot. After that, reboot your Windows should go back to normal boot.

Set the partition for the booted drive to the X: drive:

Unmount the X: drive from the system:

If you have Windows 10 version 2004 (20H1) build 19041 or newer on your physical computer, you can upgrade VMware Workstation to VMware Workstation 15.5.6 or newer and run VMware VMs on your Windows machine without disabling/uninstalling Hyper-V and Virtualization Based Security (VBS) features, including Device Guard and Credential Guard.

Due to many complaints from customers, Microsoft and VMware decided to develop a joint project that adopts Microsoft Windows Hypervisor Platform (WHP) APIs to allow type 2 hypervisors, such as VMware Workstation, to run on a host where Hyper-V is enabled. These APIs allow applications to manage CPU resources, read/write registry values, terminate CPU operation, and generate interruptions.

VMware made changes in the architecture of VMware Workstation 15.5.6 to allow their product to use Microsoft WHP APIs and fix the compatibility issue. VMM can now run at the user level (not in the privileged mode) using the WHP APIs and run VMs without direct access to CPU virtualization extensions. This mode is called User Level Monitor (ULM) or a Host VBS mode. If you uninstall Hyper-V-related features from your Windows host, VMware Workstation detects it automatically, and VMM is switched to direct access of CPU virtualization extensions (running in the privileged mode).

Limitations of the Host VBS mode:

These features must be enabled on a host Windows machine to allow VirtualBox to work with Hyper-V APIs:

The error message:
WHvCapabilityCodeHypervisorPresent is FALSE! Make sure you have enabled the 'Windows Hypervisor Platform' feature.

VT-x is not available (VERR_VMX_NO_VMX).

If the required Hyper-V-related features in Windows are enabled, the following information is displayed for the VM in the System section:

New Windows features such as Virtualization Based Security (Device Guard and Credential Guard), Windows Sandbox, WSL that use the Hyper-V engine cause a lot of problems to users, administrators, and software developers using other hypervisors such as VMware Workstation, VirtualBox, QEMU, and Google Android Emulator on Windows machines. There are two approaches to resolve these incompatibility issues: Disable/uninstall Hyper-V or use new versions of virtualization applications that support work with Hyper-V APIs, such as Windows Hypervisor Platform API provided by Microsoft.

Running VMs on VirtualBox, VMware Workstation, and other hypervisors on machines with Hyper-V by using APIs can degrade the performance of non-Hyper-V VMs. Data backup is crucial for the cases when virtualization applications fail. If you still haven't chosen the best Hyper-V backup solution for your environment, consider NAKIVO Backup & Replication. The solution offers robust backup, ransomware protection, disaster recovery and more. Download the Free Edition to see the solution in action.