How to Delete a Snapshot Using Hyper-V Manager or PowerShell

Snapshots, which are known as checkpoints in Hyper-V, come in handy when you need to retain the last properly running state of a VM before deploying new software or installing an update. However, you have to be careful while deleting snapshots otherwise, you might lose important data.

In today’s post, we explain the mechanism of Hyper-V checkpoints. We will cover when to use these checkpoints and show how to delete snapshots from the Hyper-V Manager interface and by using PowerShell.

Before we start
To achieve better data protection for your VMs and applications, try NAKIVO’s Hyper-V Backup solution to protect your virtual and hybrid infrastructure against operational failures and disasters.
Download our white paper to learn how to improve the Hyper-V backup processes.

Before we go into detail about how Hyper-V checkpoints work, let me clear up any confusion related to the terms snapshots and checkpoints.

Snapshots and checkpoints represent the same capability of saving the state of a VM at a particular point in time. This state can be reverted to in the future if an issue occurs with the VM. Microsoft refers to the feature of saving the state of a VM as snapshots for releases before Windows Server 2012 R2. In subsequent releases, Microsoft uses the term checkpoints. In addition, snapshots is the term used in VMware environments. In this post, we are using both terms interchangeably as the covered mechanism and procedures apply to both snapshots and checkpoints. So, how do checkpoints/snapshots work?

How Hyper-V checkpoints are saved

The mechanism of Hyper-V checkpoints is efficient with storage utilization. However, the performance of virtual disk reading operations is significantly reduced. The reason is that reading files would require checking the whole chain of checkpoints (.avhdx files) until the VM’s .vhdx file is reached.

In the screenshot below, you can see one parent .vhdx virtual disk and two .avhdx disks after creating two Hyper-V checkpoints for a VM.

According to this mechanism, deleting a .avhdx file does not delete the checkpoint. Instead, this kind of deletion breaks the chain and leads to data loss.

In the next section, we will show how to delete snapshots (checkpoints) from the Hyper-V Manager interface without losing data.

Hyper-V Manager is a free GUI tool for managing Hyper-V hosts and VMs. It can be used to provision VMs, allocate RAM, create snapshots or delete them. 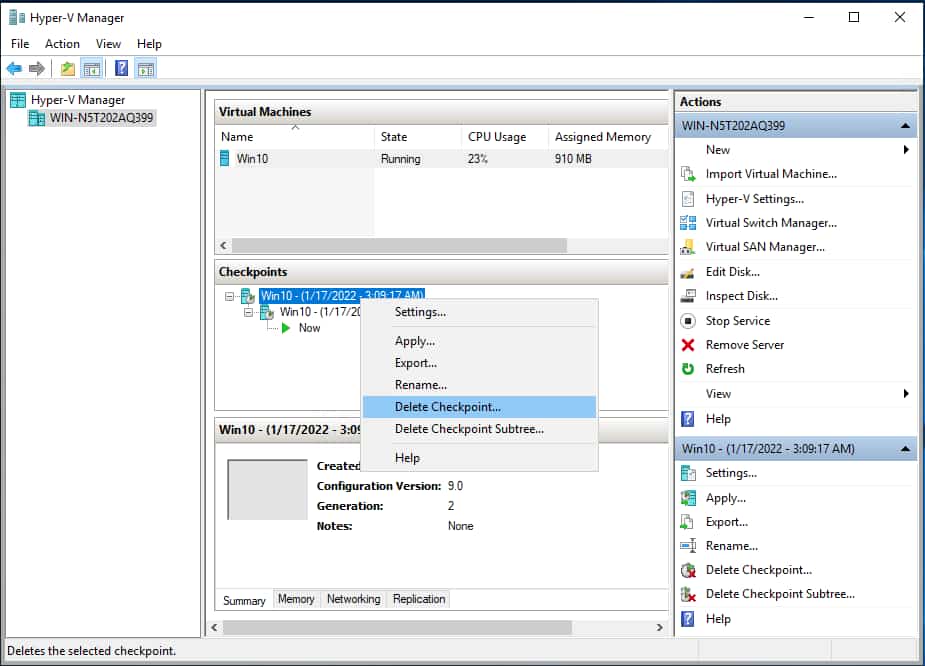 In the screenshot below, you can see a parent .vhdx virtual disk and an .avhdx snapshot file after deleting the second Hyper-V checkpoint.

To perform bulk actions on Hyper-V VMs, Windows PowerShell is more efficient than the Hyper-V Manager GUI as you can use commands to delete multiple snapshots at once. Besides, some actions, such as deleting a checkpoint that has no delete option in the GUI, can only be accomplished via PowerShell.

To delete a checkpoint by using PowerShell: 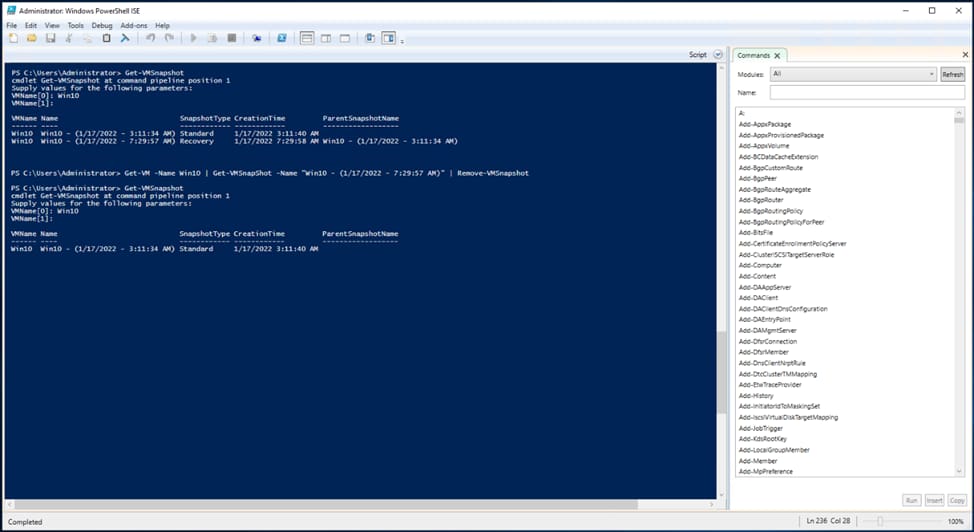 The Complete Guide to Hyper‑V Clustering