Introducing VMware Distributed Switch: What, Why, and How

A virtual switch is the software analog of a physical switch intended to connect virtual network controllers of virtual machine to networks on the second layer of the OSI model. A vSwitch is a virtual switch provided by VMware for their virtualization solutions. A standard virtual switch is a useful feature, but in large virtual environments, virtual switches on each ESXi host usually have the identical vSwitch configuration (port groups, VLANs, connected networks etc.). However, if you need to add a new port group associated to VLAN for connecting virtual machines running on ESXi hosts to that VLAN, you will need to configure vSwitch on each ESXi host identically and perform the configuration manually, which can take a long time. VMware takes this situation into account and develops a distributed virtual switch that can be configured on vCenter Server once without the need to configure standard vSwitches on each ESXi host manually. Today’s blog post covers a VMware distributed virtual switch that is also called a dvSwitch or VDS . This blog post consists of the following parts:

What Is a Distributed Virtual Switch in vSphere?

After VM migration from one ESXi host to another is performed, the VM remains connected to the same port of the distributed virtual switch (also referred to as networking vMotion, which preserves the consistency in network connectivity of VMs). vCenter is a management system for vSphere environment, including a distributed virtual switch. If, for some reason, vCenter Server is unavailable, you will not be able to change VMware distributed switch configuration, including reconnecting virtual machines to other port groups. However, even if vCenter is offline, a network will remain in a working state because hidden standard vSwitches (the IO plane) are responsible for network operation. Keep in mind that vCenter cannot be connected to a distributed virtual switch.

The VDS configuration is located on vCenter Server and every five minutes a local copy stored on ESXi servers as cache is updated. The cached configuration is stored in the /usr/lib/vmware/bin/ directory on ESXi hosts.

Let’s look at  the list of features that are available only for a distributed virtual switch and are not available for a standard vSwitch.

Note that a datacenter must exist in the vCenter inventory.

Let’s review how to create and configure a VMware distributed switch in VMware vSphere 6.7. In our example, vCenter 6.7 is used and two ESXi hosts of the version 6.7 are managed by vCenter:

In order to create a distributed virtual switch, open VMware HTML5 vSphere Client and go to the Hosts and Clusters section. Your ESXi hosts should be in the datacenter, which is a logical organization unit in vCenter. In the current example, ESXi hosts belong to the Datacenter1. Right click your datacenter and in the context menu, select Distributed Switch > New Distributed switch. 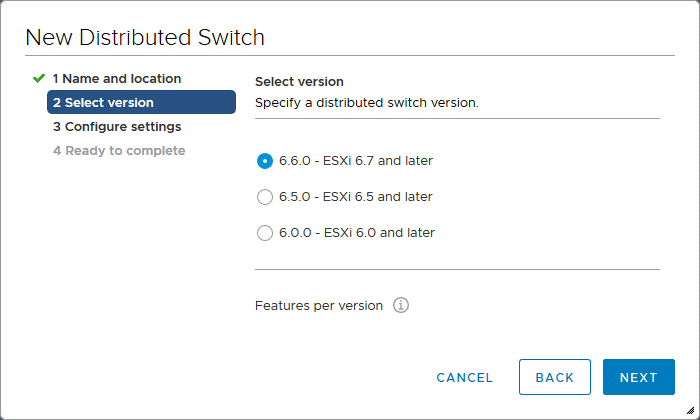 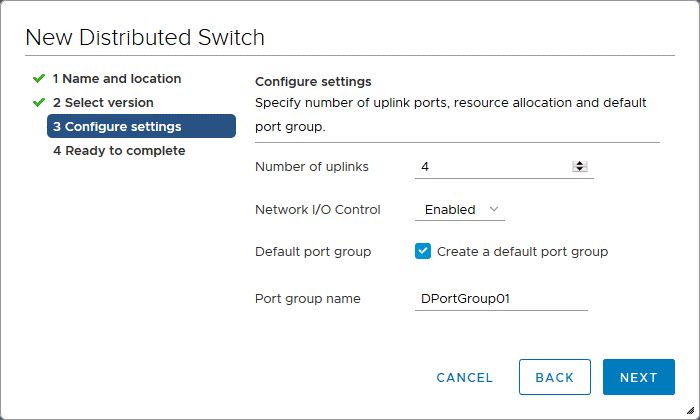 4. Ready to complete. Check your settings for a new VMware virtual distributed switch and, if everything is correct, hit Finish to create the switch. 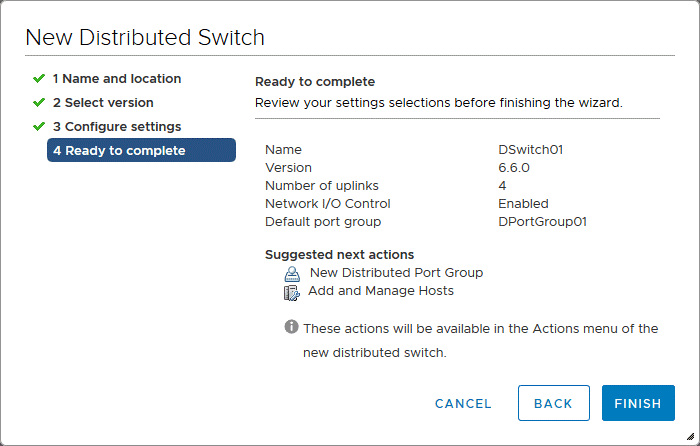 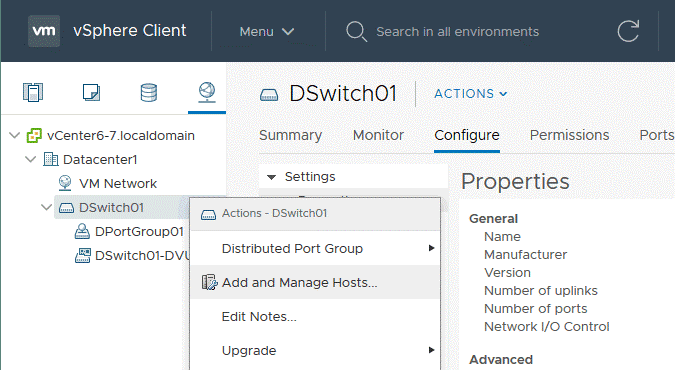 The Add and Manage Hosts wizard is opened.

2. Select hosts. Click the New hosts button (the button with the green plus icon) to add ESXi hosts. 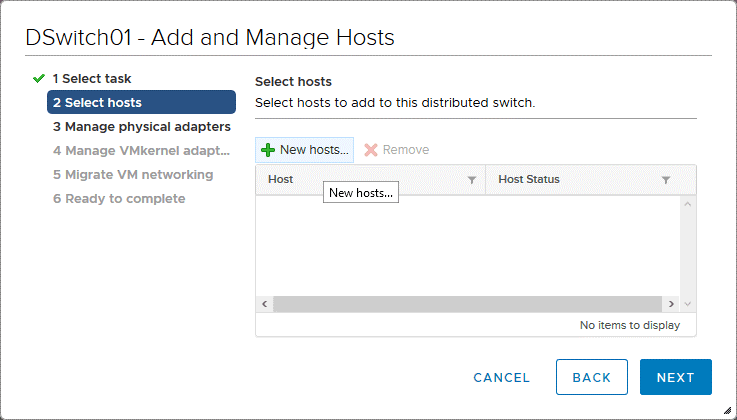 In the pop-up window, tick the checkboxes and select ESXi hosts which must be attended in VMware distributed switching. Hit OK to apply your choice. Check the compatibility in the last column.

The ESXi hosts are now selected and their status is “Connected.” 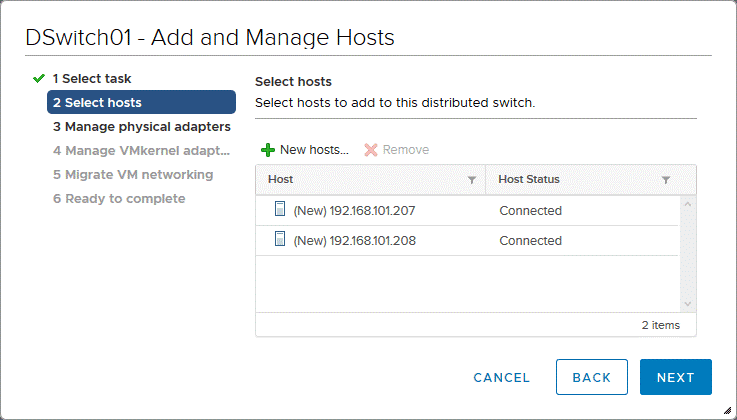 3. Manage physical adapters. You can select the necessary physical network adapters (network interface controllers – NICs) and assign uplinks to them. On the screenshot below, a standard virtual switch created on each ESXi host after ESXi installation by default is also displayed (vSwitch0). 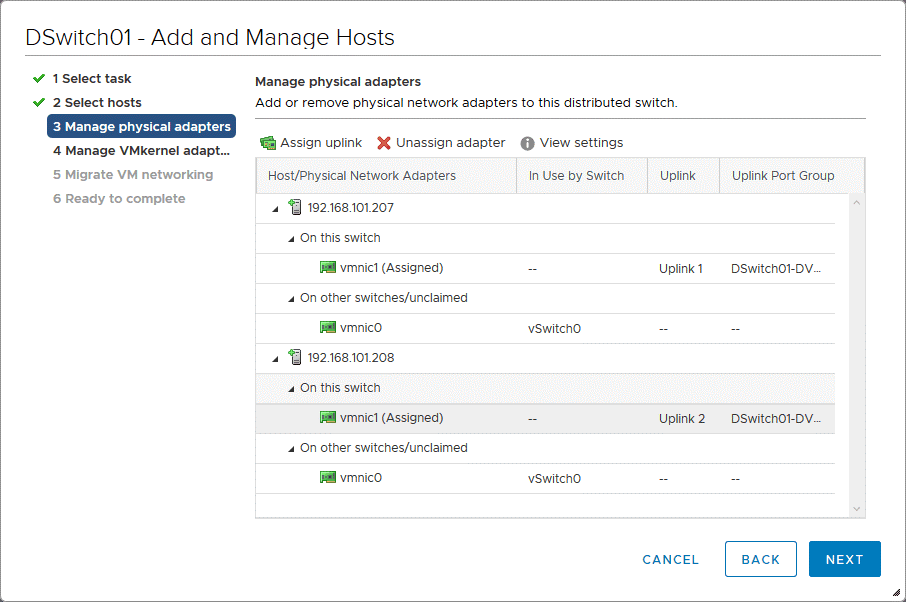 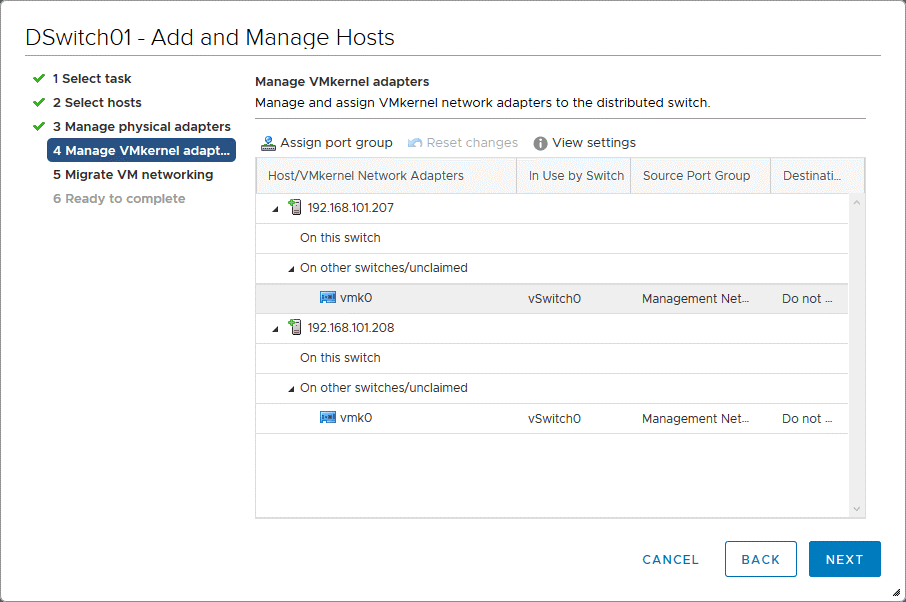 5. Migrate VM networking. If you need to migrate virtual machines or other network adapters to the distributed virtual switch, you can do it at this step. In the current example, no network adapters are migrated to the VDS.

6. Ready to Complete. Review your configuration, and if there is nothing to change, hit Finish.

Now ESXi hosts are added to VMware distributed switch configuration. You can add VMkernel network adapters to a port group of the distributed virtual switch for using different features, for example, vMotion. Let’s add a VMkernel adapter to a port group that will be used for vMotion connectivity.

In the Network section of vCenter, select your VMware distributed switch and the port group (DPortGroup01 in this case). Right click the port group name and in the context menu, hit Add VMkernel Adapters.

1. Select hosts. Click the Attached hosts button (the button with the green plus icon) to select ESXi hosts.

2. Configure VMkernel adapter. You can change MTU for a port group from 1500 to 9000 bytes for using Jumbo frames. By default, the MTU value is inherited from the distributed virtual switch settings. Select available services such as vMotion, Provisioning, Fault Tolerance logging, or Management. Let’s select vMotion.

3. IPv4 settings. At this step, you should set the IP addresses for VMkernel adapters of ESXi hosts. Using static IP addresses is generally recommended for servers. In the current example, the new VMkernel configuration is the following:

The last octet remains the same for added convenience.

4. Ready to complete. Check your configuration and hit Finish if everything is OK.

After configuring VMkernel adapters, select your VMware distributed switch, go to Configure > Settings > Topology and view the graphical view of your VDS topology. 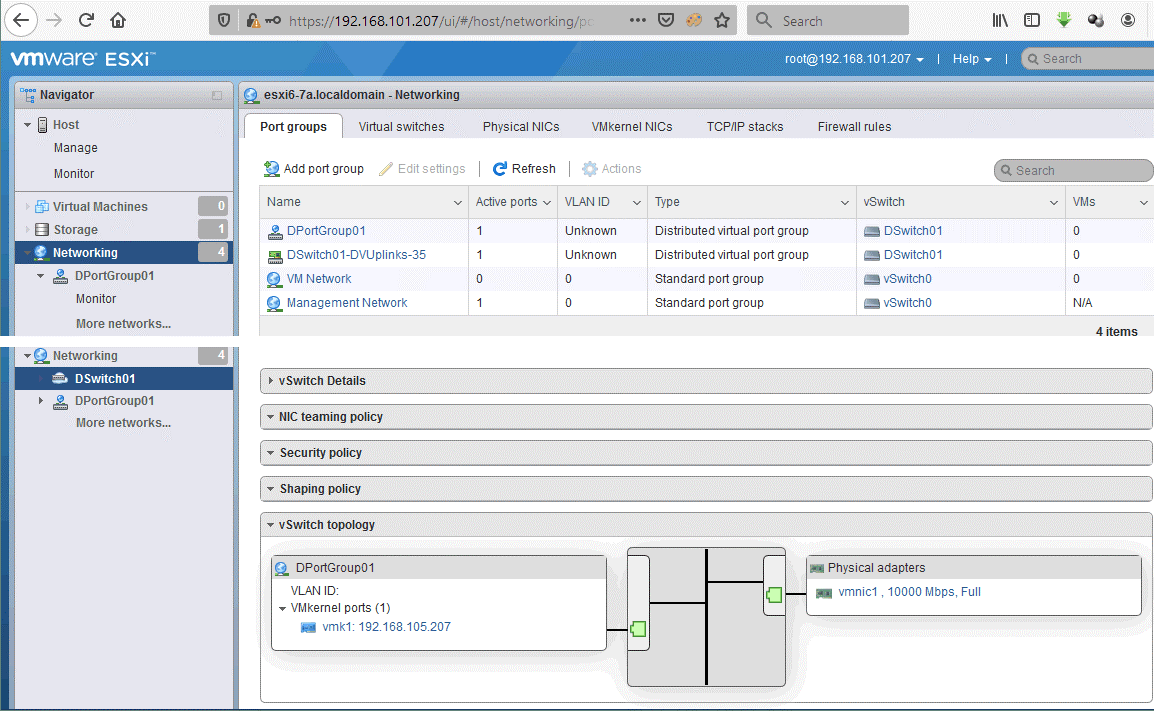 If you log in the second ESXi host (192.168.101.208 in our example) by using the VMware Host Client, you will see the identical topology scheme.

In addition to the basic settings explained above, you can modify VDS configuration and configure link aggregation, enable traffic shaping, select the discovery protocol, set the VLAN, port binding, port allocation for port groups, and so on. It is also possible to migrate from standard virtual switches used on ESXi hosts to a distributed switch. This approach allows you to manage all virtual switches in vSphere centrally. 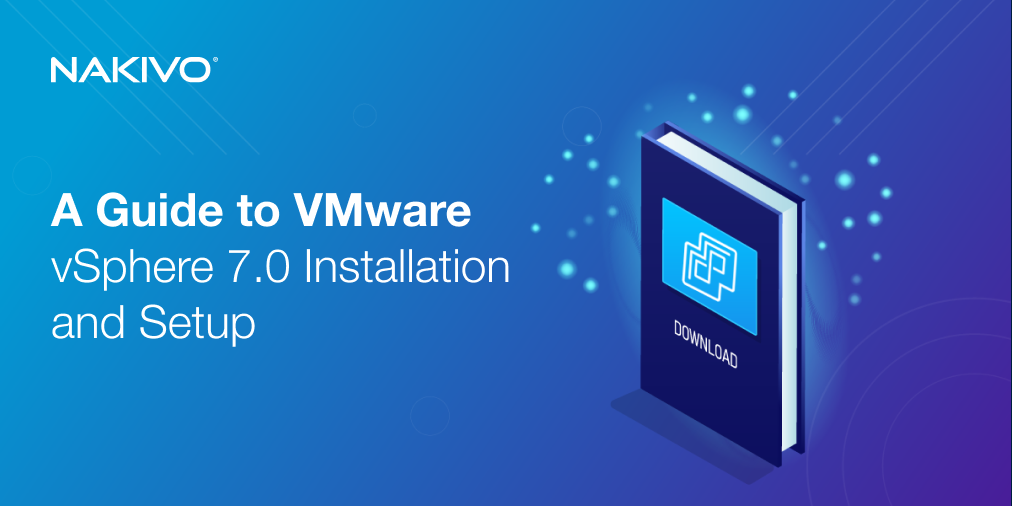 A Guide to VMware vSphere 7.0 Installation and Setup 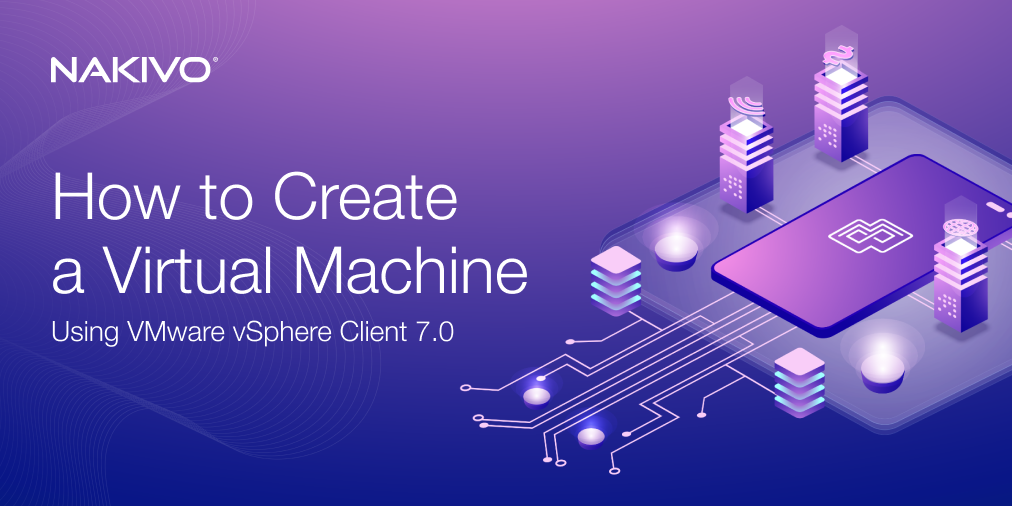 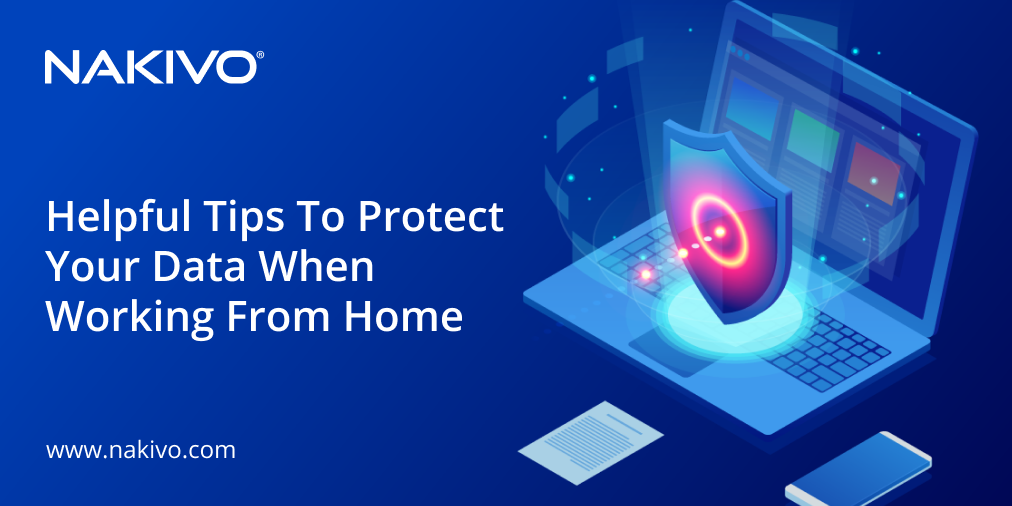 Helpful Tips to Protect Your Data When Working from Home 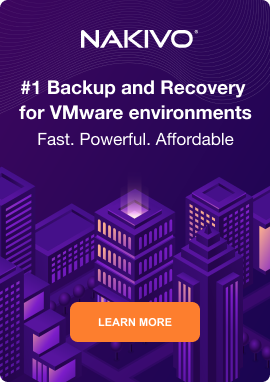