NAKIVO Blog > NAKIVO Backup & Replication > File Server vs NAS – Which One to Choose?

File Server vs NAS – Which One to Choose?

File servers and NAS devices are common solutions for storing and sharing files over a network. But the two differ in functionality. Choosing the optimal solution depends on multiple factors. This blog post is a NAS vs file server comparison to explain when to use a traditional file server and when to opt for a NAS file server.

Protect NAS data with NAKIVO
Simple and fast backup and recovery for the gigabytes of data stored on NAS devices and Windows and Linux machines via CIFS/NFS protocols. Discover NAKIVO solution to recover whatever you need and whenever you need in seconds.

What Is File Server?

A file server is a computer with software installed to provide access to resources such as shared files for multiple users and computers at the same time. Other computers and software used for connecting to the server over the network are called clients. A file server controls access to shared resources and is responsible for file storage.

A file server can be created on a standard computer or on server hardware with the appropriate server software for high reliability and near 100% uptime. You can assemble a file server in a case (chassis) of the tower (desktop) form factor or rack-mount form factor. File servers offer high hardware upgrade capabilities.

There is also the option of configuring file servers on virtual machines. A file servers can be created on a VM guest OS with the necessary configuration.

You have the ability to use custom hardware depending on your needs. This includes selecting disk controllers, RAID controllers, hard disk drives (HDDs), and solid-state drives (SSDs). You can use SAS and SATA RAID controllers and add more disk controllers into the PCIe slots of the motherboard. Configuring software RAID in the operating system is possible. SAS devices are used for the most reliable storage systems. However, if you deploy a beginner-level file server, don’t use fake RAID based on the built-in RAID functionality of the motherboard as failure is a high probability with fake RAID.

A file server provides a variety of settings – you can configure everything. You can increase the number of disks and install different software on well-known operating systems such as Windows Server, Linux, Solaris, FreeBSD, etc. When you build a high-grade file server, you can connect the file server to a storage area network (SAN) with FC or iSCSI connectivity to use more disks and store more data. Advanced features such as load balancing are also available. For example, in Windows environments, the feature is available by creating a file server cluster with shared volumes or having a secondary file server with replicated shared data using Windows DFS role. The alternative approach to configuring a NAS file server is installing FreeNAS or TrueNAS on a server.

Regarding disk storage, it’s recommended to use minimum SAS spinning disks or SSD for higher performance in case of a physical file server. If you have a file server on a VM, the disk holding the shared data should be hosted on SAS or SSD disks when it’s local disks or with FC or iSCSi connectivity if exported from SAN storage.

As for memory, it should be fair enough to hold simultaneous user access to the shared data to be able to process all the cached operations.

What Is a NAS Server?

NAS, or Network Attached Storage, is a computer-like device with bays for storage drives. The main purpose of NAS is storing and sharing files over the network with users and computers. NAS can share files with multiple users simultaneously, similarly to a file server. Thus the main function of NAS is similar to the file server.

Some NAS devices are provided in portable cases that don’t occupy much physical space. They are also quiet. These NAS devices with low noise levels are intended for home users as well as small and medium businesses. There are also advanced NAS devices for businesses in the rack mount form factor with a higher number of slots for disks.

NAS devices are provided with processors of the x86-64 and ARM architecture. The ARM architecture is intended for energy-saving mobile devices, has simplified instructions, and is not designed for high performance compared to the x86-64 architecture. Even compact NAS devices with x86-64 processors are power-saving devices, but their performance is not that high. This is because powerful processors require a cooling system that cannot be housed in a small NAS case and preserve the low noise level.

NAS devices have a limited number of bays for storage devices. If disk drives are inserted into all bays, you can attach an expansion unit with additional drive bays (if the NAS model supports this capability). Read the hardware compatibility list (HCL) before installing disk drives into a NAS device. While you can use high-performance HDDs (which can create vibrations) in massive desktop or rack-mount cases without negative impact, using such disk drives in portable NAS cases can have a negative impact on disks. This is because high vibrations are transmitted between hard disks, reducing their life span. 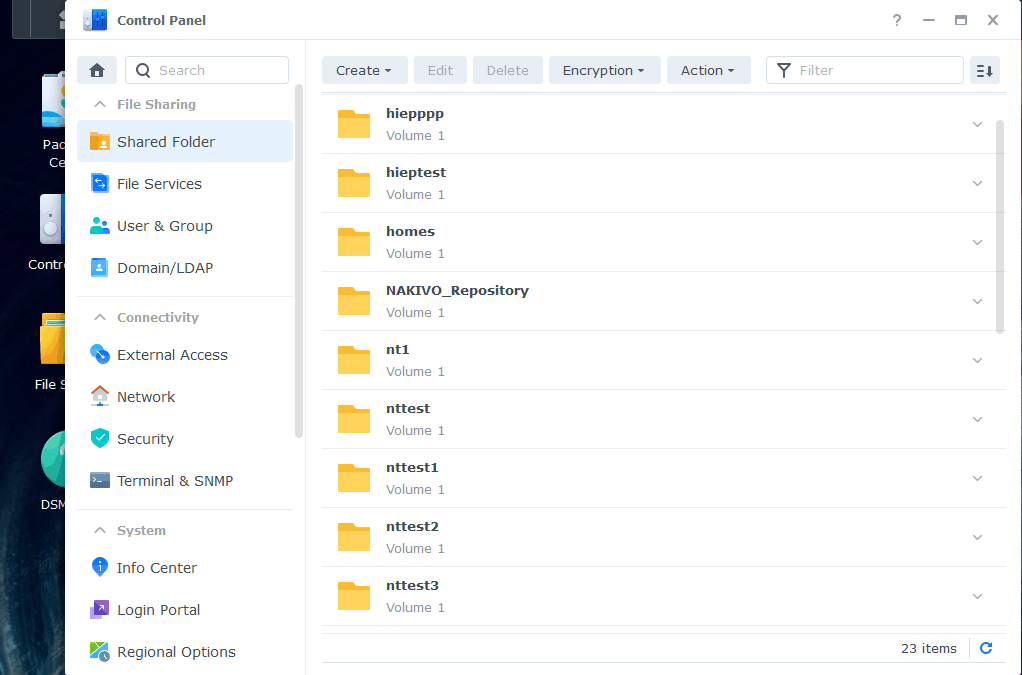 Software on NAS is easy to configure. All file sharing settings are usually simplified, and it is easy to configure a file server based on NAS to share files via SMB, NFS, AFP, FTP, SFTP, FTPS, etc. Popular file sharing protocols are supported. Configuring a file server on Windows Server 2019 is slightly more complicated than on NAS, and configuring Samba on Linux is even more complicated than configuring file sharing on Windows. NAS supports Active Directory domain integration for configuring access to shared files for domain users.

Tip: Read about the Synology NAS models and QNAP NAS models to familiarize yourself with different NAS vendors to use for a NAS file server.

We have covered features of file servers and NAS devices. Now we can look at a file server vs NAS comparison based on different parameters to identify if you should choose a file server or NAS device.

If you want the flexibility of configuring everything, opt for a file server rather than NAS. You can install a general-use operating system like Linux or Windows on a server and configure what you want, unlike NAS software, which provides limited functionality. If any hardware component is broken (for example, a storage controller, network card, or motherboard), changing this component is inexpensive. A file server provides ultimate customization options.

There are extensive hardware upgrade options for a file server, with a large range of hardware that can be used for the upgrade. As for NAS devices, you can upgrade only RAM and disk devices to drives of higher capacity if your NAS model supports this disk type and capacity.

If you need maximum performance, choose a file server. You can install a more powerful processor, a high amount of RAM, and multiple high-speed network adapters in a file server. Processors in NAS devices don’t provide high performance, especially if they are processors of the ARM architecture. A file server can serve a higher number of users working with shared files simultaneously.

File servers can provide a higher level of reliability due to the support of hardware RAID controllers with caching and the battery, including the controllers for SAS disks. SAS disks are more reliable than SATA disks and the probability of read/write errors is lower. Servers can have a redundant power supply.

NAS devices are what you need if the main objective is storing and sharing files on a device that doesn’t occupy much space in a room and doesn’t generate noise (except for some enterprise-class NAS devices in the rack-mount form factor). NAS devices are usually portable desktop devices working silently. This factor is important for home users and small offices when users want to work in a comfortable, silent environment.

In the NAS vs file server comparison, NAS devices are leaders in the power-saving category. This is because they use a CPU with lower performance than a file server and benefit from other hardware/software optimizations.

Ease of use and maintenance

NAS devices are easy to use. You just need to insert disk drives and initialize the operating system, which is pre-installed by the NAS vendor, and upgrade this operating system periodically. File servers require more skills to manage an operating system, and install and configure the software.

The price depends on configuration. For example, NAS can cost less than a server with a Windows Server 2019 license, but a server with Linux can cost less than a NAS. The price should be considered and compared in each case individually, depending on the file server / NAS requirements. NAS devices are supplied without disk drives. You have to buy disk drives separately.

When considering NAS vs file server in terms of backup, both file servers and NAS devices can be used to store data backups. Moreover, you can install components of a backup solution on a file server or NAS for effective backup. NAKIVO Backup & Replication is a universal data solution that can back up virtual machines, Windows and Linux servers, Amazon EC2 instances, data stored on NAS and files servers, and other data.

The NAKIVO solution can be installed on Synology NAS and QNAP NAS (among others), making the NAS devices a backup appliance and making it easy to back up data and store the data on NAS. Moreover, you can use an SMB share located on a traditional file server or NAS file server as a backup repository.

File shares can also be backed up. NAKIVO Backup & Replication supports file share backup that allows you to protect data that can be corrupted by one of the users working with a share or ransomware attack.