How to Mount VMFS in Windows, Linux, and ESXi

Sometimes you may need to mount a VMFS datastore in Linux, Windows, or another ESXi host. VMFS is a file system created by VMware that doesn’t have native support in other operating systems (supported only on ESXi operating systems). This blog post explains how to mount VMFS in different scenarios and the limitations of the different methods.

How to Mount the VMFS File System on Linux (Ubuntu)

If a hardware failure occurs, you have several options. You may need to be able to mount disks with VMFS datastores to another ESXi server during disaster recovery. You may also need to mount a VMware VMFS file system on a Linux machine to copy VM data for recovery. You can mount VMFS on Windows too, but this is limited to only VMFS 3, which is outdated and not used in modern vSphere environments.  Examples of hardware failures are a broken motherboard on an ESXi server or a damaged storage controller such as a RAID controller, among others.

If you use separate SCSI or SAS (Serial Attached SCSI) disks or RAID 1 as directly attached storage, you can attach disks to another machine that has a SAS controller installed without additional steps. If you use RAID 10, RAID 0, or other array types, you need to use an identical RAID controller and install drivers on a Linux machine to detect the RAID volume with the attached disks.

Note: RAID 1 and RAID 10 are the most reliable RAID options, but RAID 1 is the easiest to recover. Using RAID 5 and RAID 6 has many disadvantages, including low reliability. Using non-raid disks in production environments is not recommended.

In our example, we have an ESXi host with three datastores, each located on a separate disk for demonstration purposes.

Ubuntu 20.04.3 is a Linux machine on which we are going to mount VMFS file systems. We attach the two disks with datastore11 and datastore 10a to a Linux machine. Linux distributions don’t include the driver required to work with VMFS. For this reason, you need to install vmfs-tools, which is a free package and, after that, VMFS can be mounted in read-only mode.

How to mount VMFS 5 in Ubuntu

The installed version of vmfs-tools is 0.2.5-1build1 in our case.

The VMFS 6 partition is /dev/sdc1

As you can see on the screenshot, the partition type is VMware VMFS. The unique disk identifier is displayed. 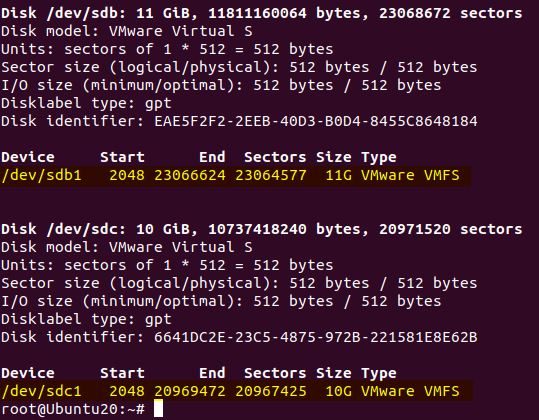 Note: You can use parted to view GPT partitions that are bigger than 2 TB: 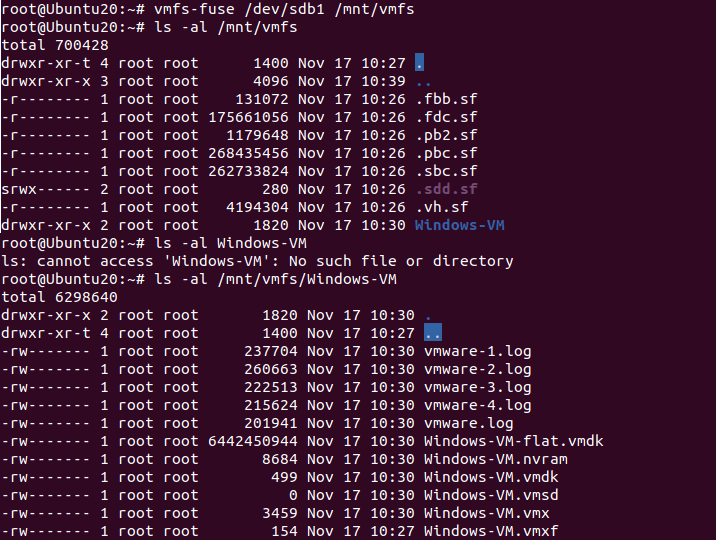 How to mount VMFS 6 in Ubuntu

Note: If you try to mount the VMFS 6 file system in Linux with vmfs-fuse, you get an error because vmfs-fuse supports VMFS 3 and VMFS 5 but doesn’t support VMFS 6. In this case, the following message appears:

You need to install VMFS6-tools which contains vmfs6-fuse that is used to mount VMFS 6 in Linux. You can find VMFS6-tools on a website with deb packages: https://packages.debian.org/sid/vmfs6-tools 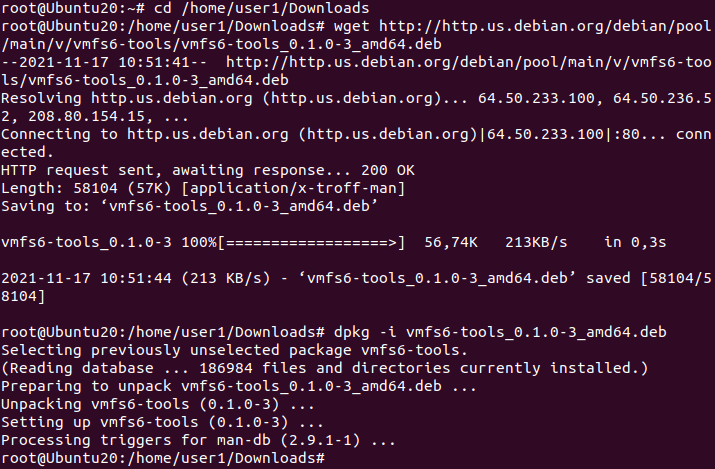 Note: libc6 >= 2.28 is required to install VMFS6-tools. If you use Ubuntu 18, you may encounter errors during installation for this reason.

The VMFS 6 file system has been successfully mounted in Ubuntu 20 in read-only mode. Now you can copy VM files to the needed location. You can temporarily run copied VMs on Linux with VMware Workstation installed or on a Windows machine with VMware Workstation or Hyper-V until your ESXi server hardware is repaired or a new server is delivered (if you don’t have another ESXi host to run the VMs).

Remember that when you copy thin provisioned disks from a VMFS file system to ext4, NTFS, or other conventional file systems, the virtual disk files take up as much space as if they were thick provisioned. That’s why be ready to prepare enough disk space.

How to mount VMFS with multiple extents in Linux

Let’s look at a more complex example of mounting VMFS in Linux when a VMFS volume consists of two extents. We have two disks of the same size, which are combined into a single VMFS volume (datastore12).

Our two VMFS extents are located on the /dev/sdd1 and /dev/sde1 partitions. 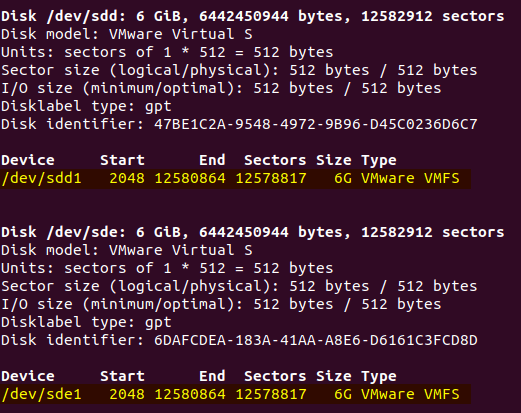 In our case the command is:

As you can see on the screenshot below, the VMFS 6 file system, which consists of multiple extents, has been successfully mounted in Ubuntu. 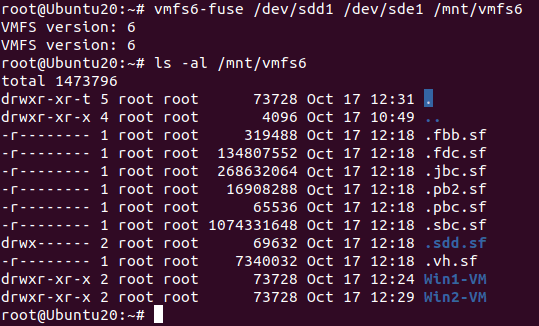 Now you know how to mount VMFS in Linux in different scenarios.

You can mount VMFS datastores on different ESXi hosts. This option is useful when one of the ESXi hosts has failed and you need to copy data from a VMFS partition or run VMs stored on that partition. You can even perform the new ESXi installation on a server to mount existing VMFS datastores. The ESXi installation process is fast and straightforward and it usually takes a few minutes to install this hypervisor.

The advantage of this approach to mount existing VMFS datastores is that you use native software and the newest VMFS versions are supported in the read/write mode. Let’s look at how to mount VMFS datastores that already exist on another ESXi host.

How to Mount VMFS in Windows

The ability to mount VMFS in Windows is limited because you can use existing tools to mount only VMFS 3, which is outdated and not used in modern vSphere environments. VMFS 3 was supported in ESXi versions older than 5.0. VMware vSphere 7.0 doesn’t support VMFS 3.

At the time of writing of this post, VMFS 5 and VMFS 6 are widely used.

However, if you need to mount VMFS in Windows and the file system is VMFS 3, you can use the Open Source VMFS driver written on Java. This driver was last updated in 2010 and requires Java installed in Windows.

We have explained how to mount VMFS in Linux, Windows, and ESXi. The easiest way to mount existing VMFS datastores is attaching the disks to another ESXi host. However, you can mount VMFS in Linux in the read-only mode, including the latest VMFS 5 and VMFS file systems. VMFS tools and VMFS 6 tools are used for this purpose. As for Windows, VMFS support is quite limited for existing tools and doesn’t allow you to mount the latest VMFS versions in Windows.

Manual VM recovery by copying files from a VMFS file system mounted to a healthy computer after an ESXi host failure can be time-consuming. You can protect data in a more efficient way if you use a professional backup solution such as NAKIVO Backup & Replication that supports VM backup on the host level, thin provisioned disks, instant VM recovery, and instant granular recovery. Restoring VM data from a backup can be more effective than manual VMFS recovery.

Get free VMware VM protection for 1 year
Protect up to 10 VMware vSphere VMs for free with NAKIVO for 1 whole year. Get access to robust data protection capabilities, including flexible and reliable post-ransomware recovery without paying a penny. Download the Free Edition now!