According to recent studies, more than 67% of companies back up machines and data on a daily, weekly, monthly and yearly basis. The simplest way of backing up a machine is by creating a full backup, that is to copy an entire machine to a backup repository on each backup run. The catch is that running full backups takes a long time, especially when machines hold large amounts of data, place a load on production networks, and take up a significant amount of storage space over time.

Incremental backup is a backup method whereby only the data that has been created or modified since the last backup run is copied to the repository. This way, only the necessary amount of data is transferred to ensure zero data loss. Initially, a full backup is created and then a chain of incremental backups follows.

With this incremental backup approach, it is recommended that full backups are created periodically to to benefit from the advantages of both methods, that is, shorter backup windows, storage savings and improved recovery speed. Thus, during recovery, the backup solution relies on the most recent full backup file and the increments made after it instead of “replaying” all increments starting from the initial backup.

Backup software usually allow you to create a full backup manually or automatically using either the active full or the synthetic full backup method:

Below is an example of how incremental backups work.

In our example, there are 3 files in a VM, and each file consists of four data blocks numbered 1 through 4. The initial full backup is made on Sunday.

When using incremental technology, a backup application does not copy the three files or the four blocks of File 1. It just copies the 1 changed block of File 1 and sends the information that this block must replace block 1.

On Tuesday, we add blocks 6 and 7 to File 2. Again, only those changes are copied to the backup repository.

On Wednesday, we delete File 3. No data is transferred, except information that File 3 has been deleted. 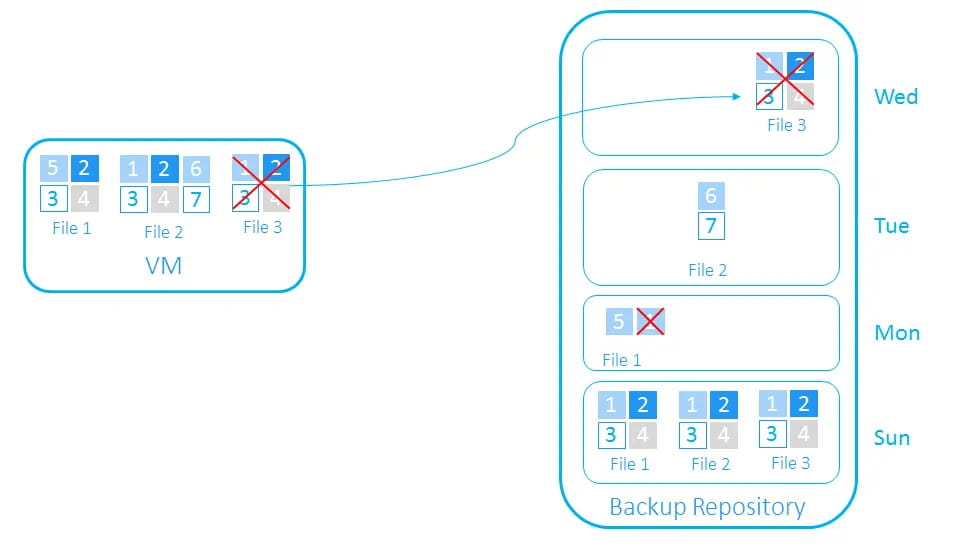 Incremental backups are especially efficient in large environments with many workloads and large amounts of data. If you run a full backup for every VM in your environment regularly, you would need an unreasonably high budget for storage media. For example, if you have 10 VMs with Windows Server 2016 (which requires 32 GB for a clean install), and you need to back them all up every day, you will end up using 320 GB of free space every day or more than 2 TB weekly. Simply speaking, you’ll need a few new HDD disks every week.

In this case, you need to make an initial full backup, that is 320 GB of space total. If we assume that daily changes on each machine average at 1 GB, the total is 10 GB of data daily or 70 GB per week. This comes down to much less than 2 TB for the same number of recovery points.

How exactly are the changes on VMs tracked? VMware vSphere, Microsoft Hyper-V and Nutanix AHV hypervisors have their own technologies. These are Changed Block Tracking (CBT) in VMware, Resilient Change Tracking (RCT) in Hyper-V and Changed Regions Tracking (CRT) in Nutanix AHV. These native technologies provide the quickest way to identify changes in source data and help shorten backup windows.

Many backup solutions also offer their own proprietary change tracking algorithms in cases where it is not possible to use CBT, RCT or CRT for some reason. Keep in mind that native tracking technologies log changes in real-time. In contrast, proprietary trackers usually read the entire contents of a VM to identify the changes, a process which can be more time-consuming.

As only the changed data is copied, the backup processes are performed quickly and the least possible space is occupied in the repository. The downside of forever-incremental backup, however, is the time necessary to reconstruct the original machine during recovery. The reason for this is that during recovery, a backup solution must first recover the initial backup and then “replay” all the subsequent increments to the date of recovery to reconstruct the full machine.

Going back to our previous example above, a backup application would first need to recover 3 files with all their data blocks, then replace block 1 with block 5 in File 1, then add blocks 6 and 7 to File 2, and finally delete File 3.

Some backup solutions still use this approach. Others allow you to improve recovery speed by using certain “techniques”. For example, NAKIVO’s solution delivers a special storage type where recovery points serve as references to increments. This way, the solution can quickly identify data blocks needed to reconstruct a VM at a particular point in time, which improves the recovery speed.

The default backup method in NAKIVO’s solution is the incremental-with-full approach. When the mode is used, the solution stores unique data blocks after the initial full backup with periodic active full or synthetic backups created as often as you need. This approach combines reliability, speed and resource savings.

Save time and storage space with NAKIVO Backup & Replication by creating incremental, application-aware backups and instant granular restores. Download the Free Edition to try out its Pro Edition features and functionality for one year, free of charge.