A Guide to Running Automatic and Manual Office 365 Updates

Vulnerabilities can be used by malicious actors to initiate malware or ransomware attacks on your computers. Microsoft regularly fixes new-found vulnerabilities and includes them in Office 365 software updates. That’s why you are more protected if you use Office 365 software that is up-to-date. This blog post covers Office 365 update settings and explains how you can change these settings by using different methods.

Before we start
You can achieve a higher level of protection against malware and ransomware for your data in Microsoft 365 if you regularly update Office 365 applications and back up Office 365 data. The solution also supports physical servers and virtual machines to create application-consistent backups, which adds more flexibility in hybrid environments. Download the Free Edition and start protecting your data with NAKIVO Backup & Replication.

Open one of the Office 365 applications installed on your computer, for example, Microsoft Word 365.

In the menu bar of the Word window, click File. 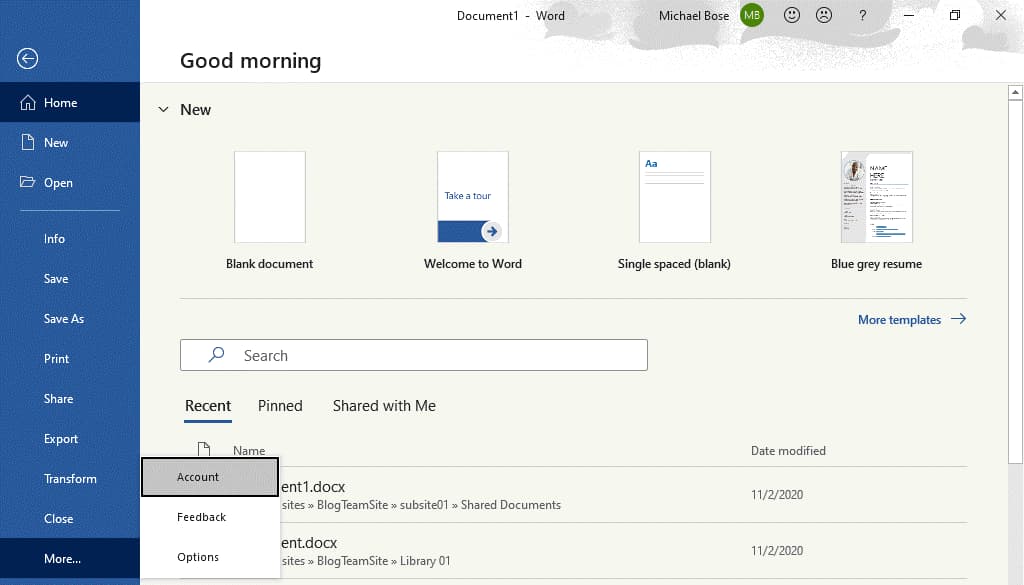 The Account screen opens. I have already logged in to Office 365. In the Office Updates section, click Update Options. In the menu that opens, you get four options: 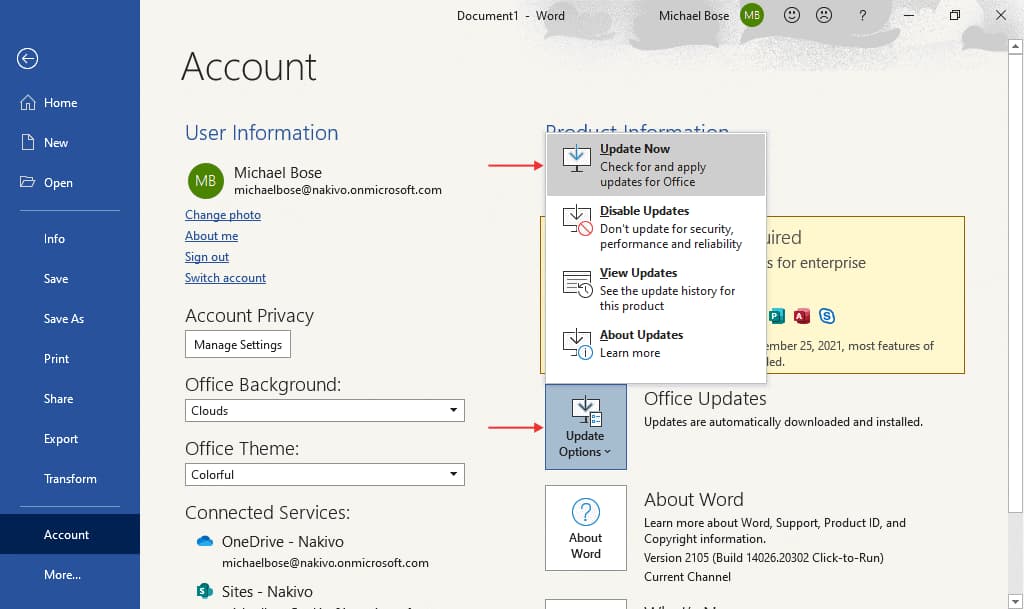 First, Office 365 needs to check for Office updates. If there are available Microsoft 365 updates, then the updates are downloaded and installed. You should see four steps during updating Microsoft Office 365:

The appropriate window is displayed at each step while updating Microsoft Office 365. 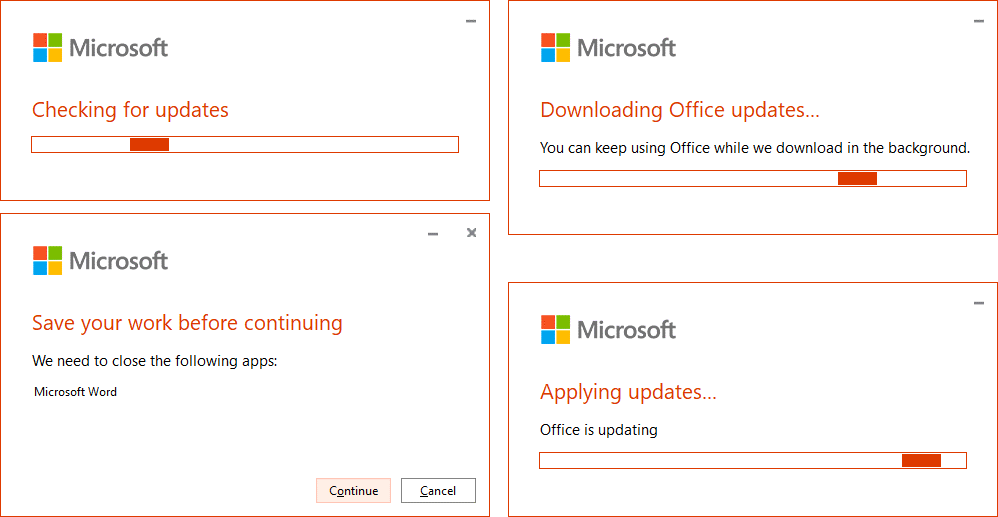 Once the Microsoft 365 update is finished, you should have the latest version of Office 365 available on your computer. Now you can reopen the Office 365 applications.

Semi-Annual Channel. Security updates are provided once per month. Non-security updates are provided twice per year. New features are released in January and July. Features included in the Semi-Annual Channel were previously released in the Monthly Channel. This channel is the default Office 365 update option for Office 365 Pro Plus and is generally the basic option. Other names for this channel are “Broad” and “Deferred”. Use this channel if you want to keep the oldest supported build longer and avoid frequent major updates.

How to Check Microsoft Office Version and Update Channel?

You need to know how to check the Microsoft Office version to understand whether your Office applications are up to date.

Open one of the installed Office 365 applications on your computer, for example, Microsoft Word.

The version number, build number, and update channel name are displayed in this section. In my example, I have Office 365 version 2108, build 14326.20404. The Current Channel is used to deliver Office 365 updates. 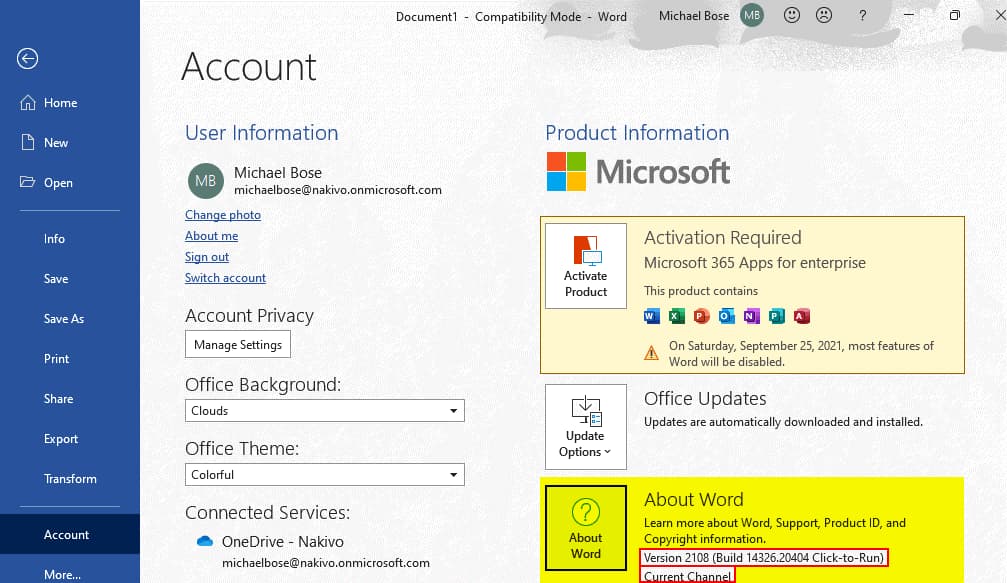 There are multiple methods to change an Office 365 update channel. Office 365 must be already installed when you use the second, third, and fourth options:

Note: When you move from a channel with a higher Office 365 build number (for example, Current Channel) to a channel with a lower build number (such as Semi-Annual Channel), the update (the amount of downloaded data) can be larger than usual. Features available only in the newer version are removed in this case.

In the navigation pane of the admin center, go to Settings > Org settings.

The Office installation options display pane appears, and you can set how often users should receive Office 365 updates within your organization. In the Feature Updates tab, select one of the update options and the channel to update Microsoft Office 365: 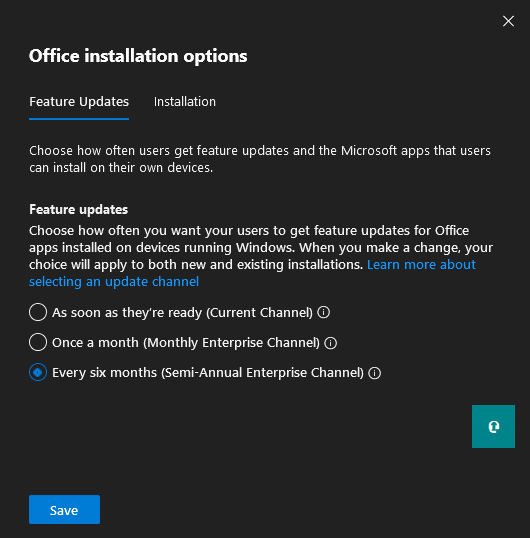 Choose how your organization gets new features and service updates from Office 365: 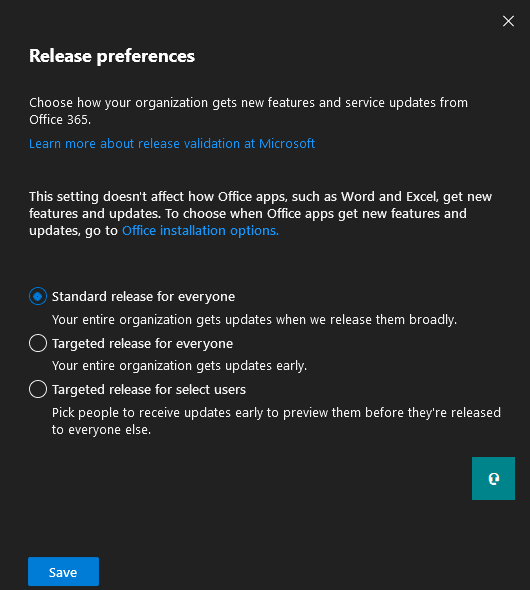 Changing the Office 365 update channel in the command line

Go to the folder where the needed Office 365 tool is located:

Run the command to change the Office 365 update channel. In this example, I am changing the update channel from Current to Semi-Annual.

A window similar to the window displayed when downloading updates appear. Wait until Office 365 is reconfigured and Microsoft Office updates for the selected changes are downloaded and installed.

The Office 365 update channel has been changed successfully.

The version of Microsoft Word is now 2101 (the version was 2108 before changing the channel). The Microsoft 365 update channel is now the Semi-Annual Enterprise Channel. 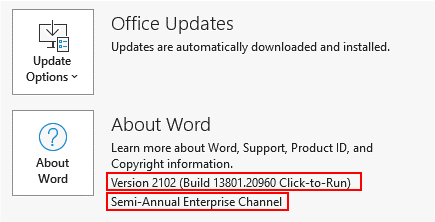 Find the CDNBaseUrl entry. You can see the URL in the Data field for the Office 365 update channel that is selected now.

URLs for different Office 365 channels are listed below.

Right-click the CDNBaseUrl entry. In the context menu, click Modify.

In the edit string, enter the new value data that represents the Office 365 update channel you want to use. In this example, I change Semi-Annual Channel to Monthly Channel (Current Channel) and paste the URL:

The new value is set.

Now you can update Office 365 by using the updated channel you have selected in the last configuration.

Open one of the Office 365 applications installed on your computer, for example, Microsoft Word. Go to File > Account > Update options > Update now to initiate the update. 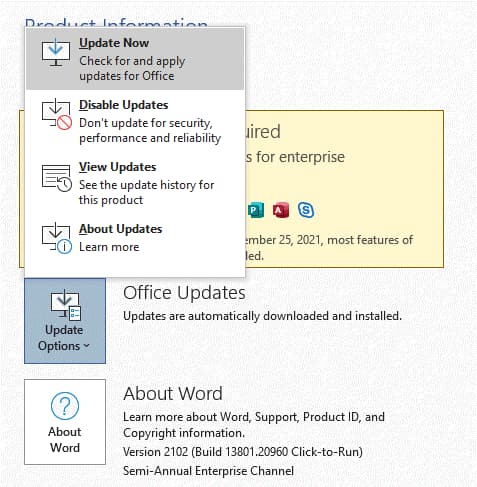 In Task Scheduler, make sure that the Office Automatic Updates 2.0 task is enabled. This task is required to run automatic updates for Office 365. The task detects changes in the policy and updates the selected channel in the configuration.

To open Windows Task Scheduler, click Win+R, type taskschd.msc, and click Enter. As an alternative, you can find the appropriate shortcut in the Start menu or Control Panel.

In my example, everything is OK, the task is present. I can now configure a group policy for selecting a channel for Office 365 updates. 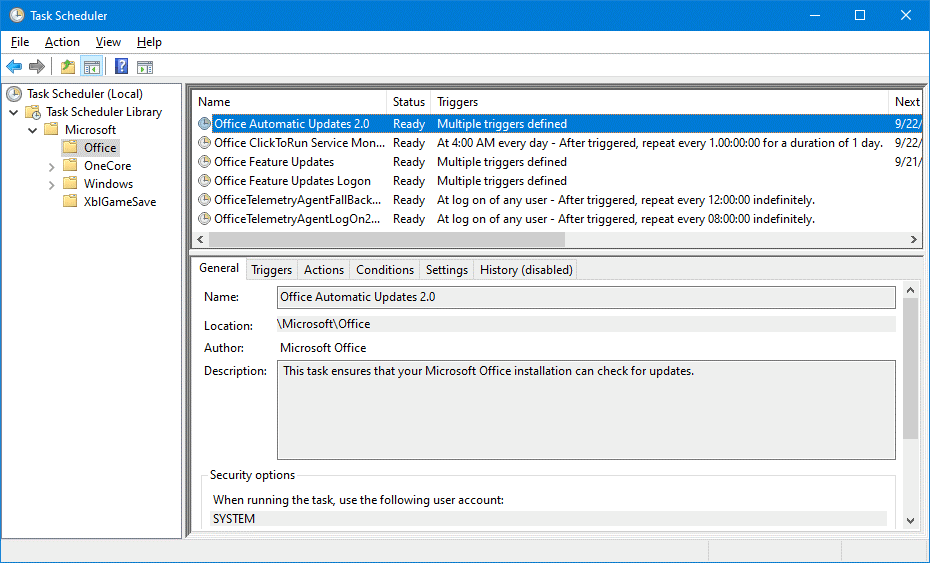 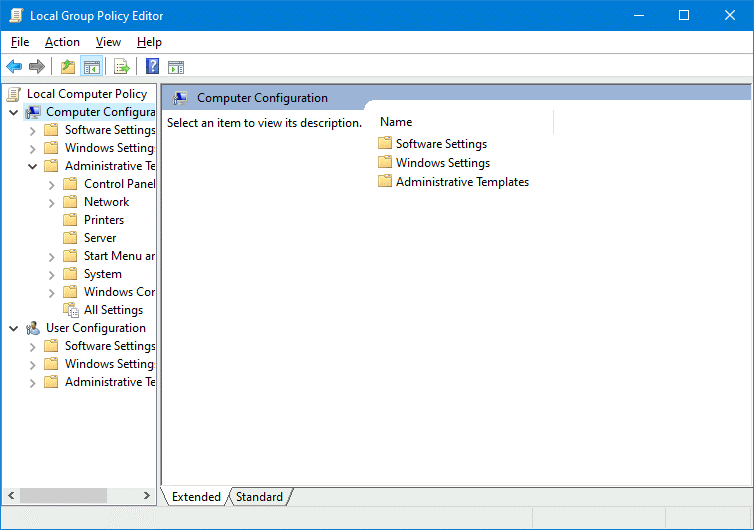 You can close Group Policy Editor for now while you add the missing administrative templates.

Download administrative template files for Office 365 by using this link:

Define the directory to which files should be extracted, for example, C:\temp\o365+\

ADMX files are extracted to the selected directory. ADMX files are Windows administrative template files used to configure settings by changing registry entries. ADMX files are XML-based files that can be created and edited in an editor that supports the XML format.

Check the admx subdirectory in the directory to which you have extracted the files (C:\temp\o365+\admx in our case). There are subdirectories for different languages. I use English and also need files in the en-us directory. 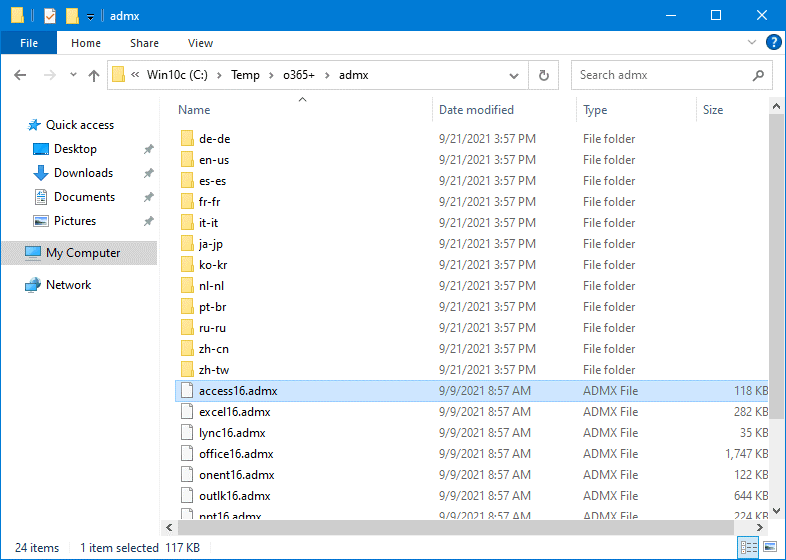 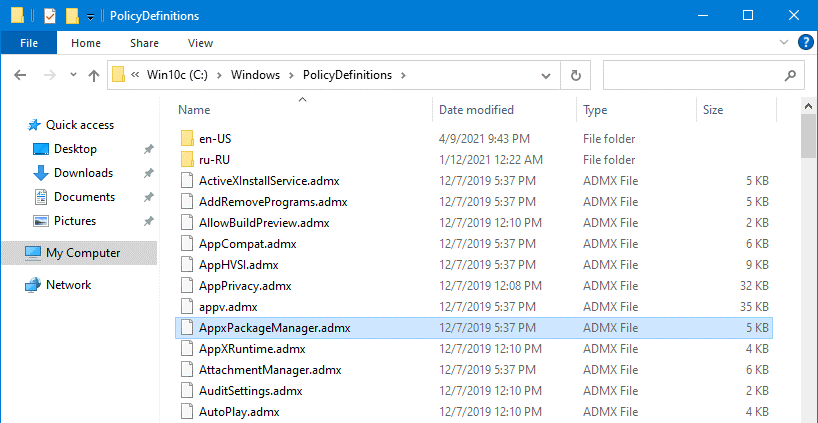 Now the needed templates are available. 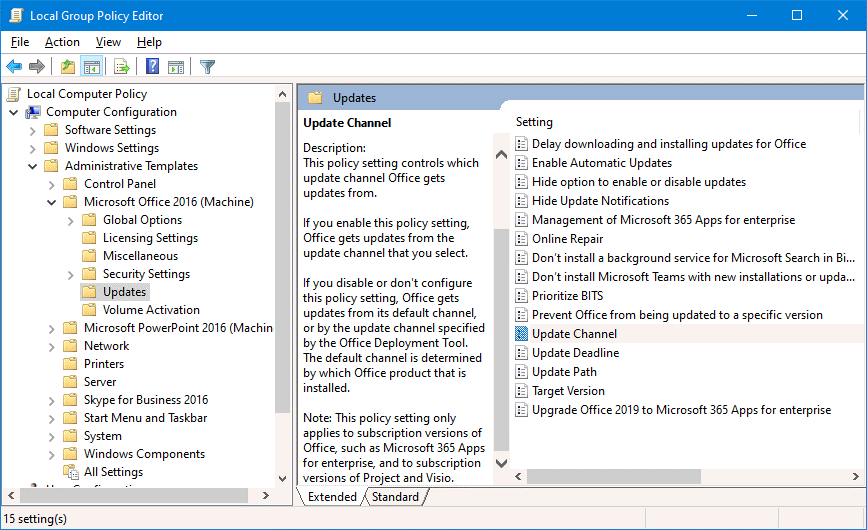 In the Update Channel setting window, select the Enabled radio button. Then select the needed channel name in the drop-down list (for example, Current Channel). Click OK to save the configuration and close the window. 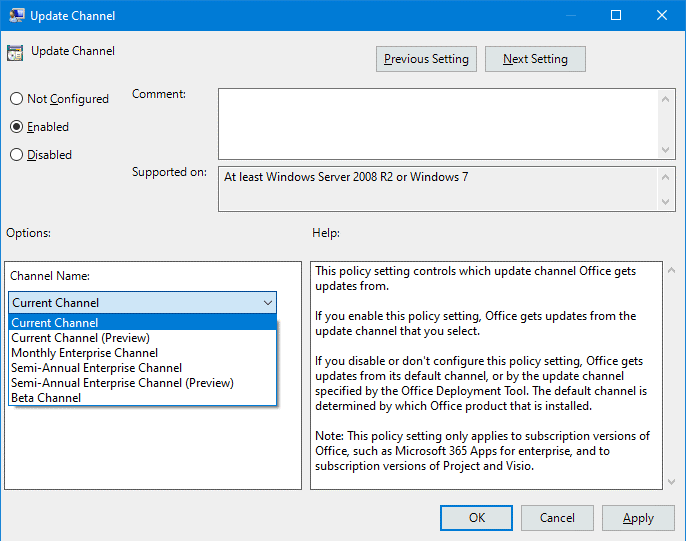 By default, a policy should update automatically every 90 minutes. The Office Automatic Update 2.0 task should run after you update the policy and run gpupdate for the changes to take effect.

Using the Office Deployment Tool was explained in the blog post about Office 365 ProPlus and remote desktop configuration. The tool is used to start Office 365 installation with custom parameters. In order to define the Office 365 update channel, download and extract the tool. Then edit or add the following section to the xml configuration file:

Define the Office 365 update channel such as:

You can define any supported update channel. Save the XML configuration file and deploy Office 365.

Office 365 updates allow you to have up-to-date applications with bug fixes and new features. You can tune the update options depending on your needs and set the frequency of receiving the updates. Different Office 365 update channels are used for this purpose. Multiple methods can be used to define the update channel. Office 365 updates fix security vulnerabilities that can be considered as a potential threat to your data. Therefore, it is recommended that you back up your data. NAKIVO Backup & Replication is a universal data protection solution that supports Office 365 backup and can protect physical and virtual machines. Download NAKIVO Backup & Replication Free Edition and try the solution to back up data in your on-premises and cloud environments.