Site Recovery is a new advanced feature that was released with NAKIVO Backup & Replication 8.0. With Site Recovery you can easily create a disaster recovery plan for your environment and restore your virtual machines with their respective workloads. The previous blog post of the Site Recovery series explored VM failover which can be used as an action for a Site Recovery job and can switch from a source VM to a VM replica. Today’s blog post covers a failback action (which is a reverse to failover), the role of failback for site recovery, and how the failback action can be used. 2. After performing failover to a VM replica, the workloads were migrated to a disaster recovery site. Any further changes to the VM (e.g., transactions added to a database as customers make online purchases) are written to a virtual disk of the VM replica during operation. Some blocks are written, and some blocks are erased. The virtual disk of the source VM does not include those transactions. 3. The damage caused by the disaster has been resolved (or the threat has passed). The production site is functional again and, accordingly, the workloads must be returned to the production site from the DR site. The updated data of the VM replica must be transferred back to the source VM. The VMs must be re-synchronized with reverse replication through a failback process. How Does Failback Work in NAKIVO Backup & Replication?

In order to make failback possible, the following conditions must be met:

Failback can be performed either in production mode or in test mode. Let’s consider how each case works in detail.

When failback is complete, cleanup is performed. The algorithm of cleanup differs depending on the outcome of the failback operation.

There are three steps for cleanup if failback has run successfully:

After a successful failback operation, both the source VM and the VM replica exist in their normal states.

Cleanup After a Failed Failback Action

If the failback operation is not executed successfully, for whatever reason, then three other steps are performed to roll back the environment to a pre-failback state:

The procedure for test failback is as follows:

As you can see, in test failback, the VM replica is used to host the workloads and is not powered off, which contrasts with the production failback procedure. Replication from a VM replica to the original source VM (or a new production VM) is performed once, not twice, because this is sufficient for testing purposes. In this case, the source VM can be connected to an isolated network so that there is no disruption whatsoever to the production environment.

If the source VM didn't exist before the test failback was run:

If the source VM already existed before the test failback was run:

Let’s use a walkthrough example how to perform failback with NAKIVO Backup & Replication. First, make sure that failover has been run as a part of a Site Recovery job (this should have already been created). Then create a new Site Recovery job; the failback actions can be incorporated into this job. On the home page of the web interface of NAKIVO Backup & Replication, click Create > Site recovery job. 1. Actions. In the left panel of the Actions interface click Failback VMware VMs (the VMware platform is considered in this example, but you can operate failback just as easily for other environments by clicking Failback Hyper-V VMs or Failback EC2 Instances). Select the VM replicas to which the failover operation should be applied. Click Next. Select a failback location – this could be the original production site or a new location. Click Next.

Select the job options. Tick the Power off replica VMs checkbox if needed. Click Save when you are ready to proceed.

After you have added the failback action, the Site Recovery job looks like this (see the screenshot below). Click Next. 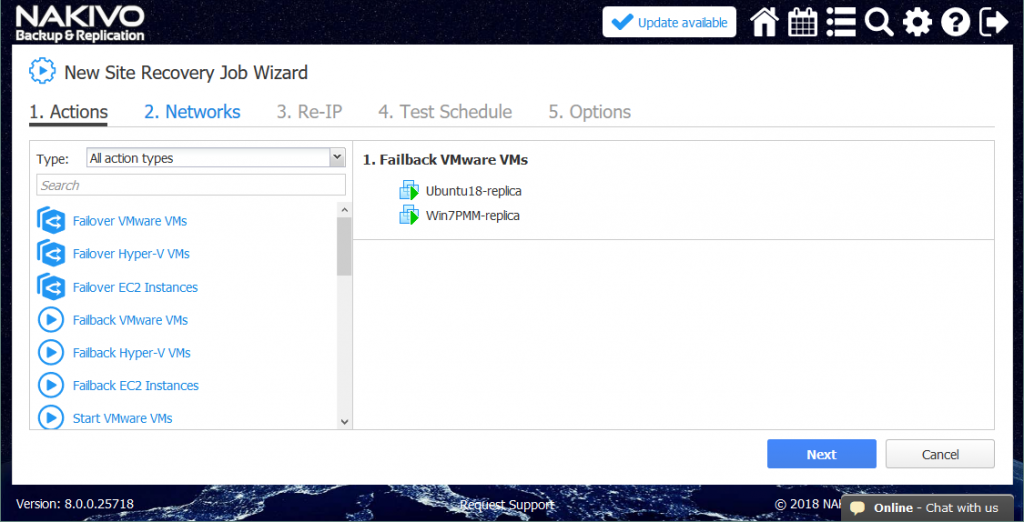 2. Networks. Tick the checkbox if you need to enable network mapping for this job. Click Next.

3. Re-IP. Tick the checkbox if you need to enable Re-IP for this job. Click Next.

4. Test Schedule. Configure your scheduling options, then click Next. Failback is a critically important action for most site recovery workflows. It is performed to restore the workloads to a production site by transferring the updated data of the VM replicas that were used for disaster recovery back to the original source VMs (or to a new VM at a more permanent location). Failback allows you to keep the virtual machine data current, automate the data transfer process, and minimize downtime when migrating from a DR site to a production site.

This blog post concludes our series on Site Recovery in NAKIVO Backup & Replication, a complex but user-friendly feature with which you can flexibly implement your disaster recovery plan and protect your virtual environment against disasters. Try the latest v8 in your own environment to see how this functionality could save your business time and stress.