Exciting news! NAKIVO Backup & Replication v7.3 is now out of beta and available for download. We have added support for deduplication appliances to ensure the smooth integration into your virtual infrastructure.

How Does the New Backup Repository Work?

The primary difference between the normal (forever-incremental) and the new type of backup repository is easily deduced: while the normal repository stores only increments (i.e., the changes made to a VM since its last backup job), the new one stores VMware backup chains consisting of periodic full backups and several increments between these full backups.

In terms of integration with deduplication appliances, the new repository type:

When the normal type of repository is used for VM backup, changed data blocks are written to thousands of different files at the same time. This results in thousands of parallel data streams and scattering data blocks from a single VM across different files in the backup repository. Enterprise-level deduplication appliances, however, are often optimized for receiving data in a limited number of streams (more like dozens than thousands). In the new repository type, all backed-up data blocks are arranged into a limited number of files for each VM: one full backup file and one additional file for each increment. Therefore, when a VM backup job is run, the number of streams is limited to one per VM.

With the new type of the repository, freeing up space in your storage is as easy as manually deleting full or incremental backup files. Older backup files will also be deleted automatically after exceeding the limits you set in your retention policy.

When a VM backup is deleted, unoccupied spots appear in the normal repository where the corresponding data blocks were previously stored. These spaces can’t always be filled with new data blocks, and that’s why periodic space reclaim is needed. Because of the new repository’s different approach to file storage, no space reclaim is required.

How to Use the New Type of VM Backup Repository in NAKIVO Backup & Replication v7.3

In the Type field, select the “Incremental with full backups” type of repository./p>

All the other settings can be configured as usual, except that the space reclaim and deduplication options will not be available. 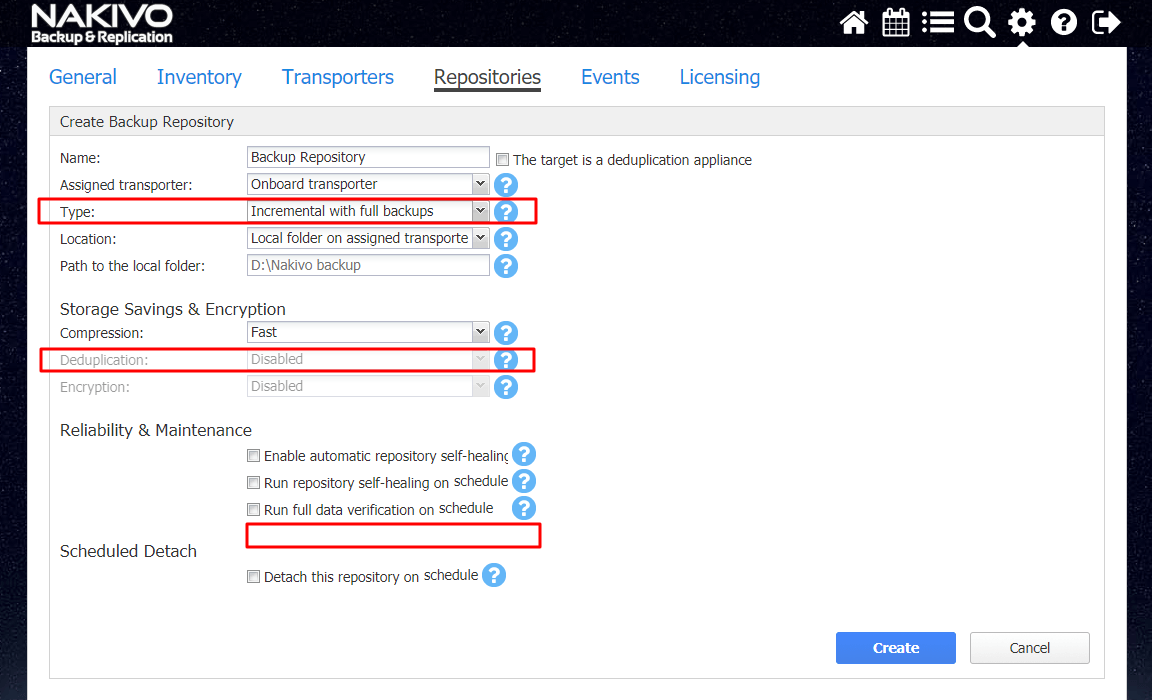 NOTE: If you tick the box next to “The target is a deduplication appliance”, the new repository type will be selected automatically:

Your choice of VM backup repository type in NAKIVO Backup & Replication should depend on the particular needs of your company. Each type has its own advantages, and it’s impossible to say that one is better than the other. The availability of both options gives you the flexibility of choosing the one that will work best in your environment. In terms of the other useful features of NAKIVO Backup & Replication, both repositories provide equal opportunities and convenience.